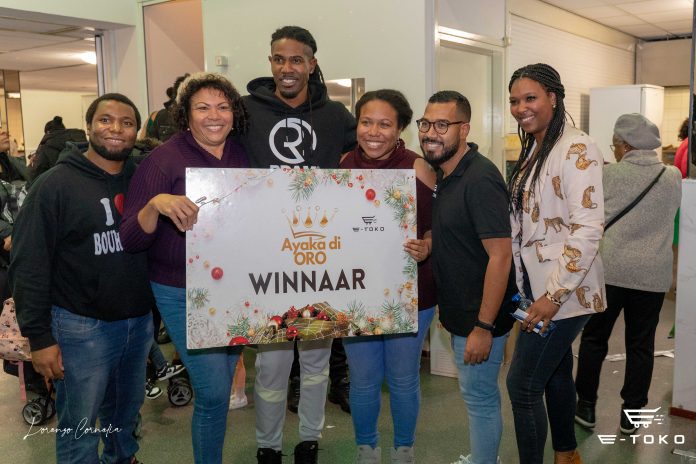 The winner of the Antillian culinary competition ‘buskando e ayaka di oro’ 2022 is Crystal Haseth. During the well-attended first edition of the Antillean Christmas market, this ayaka maker was awarded the title of best ayaka maker in the Netherlands and Belgium.

The winner of buskando e ayaka di Oro 2022 is Crystal Haseth. By winning this gastronomic competition, her ayaka is officially the best ayaka of the Netherlands and Belgium. An ayaka is a delicacy eaten around Christmas time on the ABC-Islands.

E-Toko, the main sponsor of the event, also provided the reward. E-Toko’s director Jason Steba and head of marketing Gabriel Schobbe presented the prize to the winner. The prize consisted

of a winner’s certificate, a cash prize of € 250 and the opportunity to sell ayakas via E-Toko’s online store.

“We conceived and organized this event with the idea of giving ayaka makers a platform to connect with ayaka lovers and to settle the discussion at the office about who has the tastiest ayaka,” says Jason Steba, director of E-Toko. Next year “Buskando e ayaka di oro” will take place again.

Ayrton Schenker: An 8 year old golfer dreaming of US Kids...