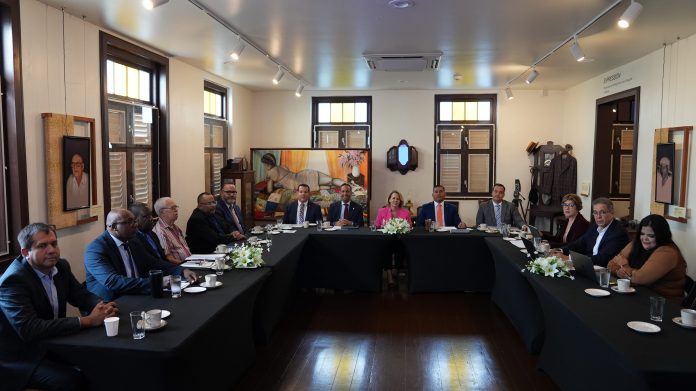 Last week Friday, the government of Aruba organized its first Ministerial Advisory for the year 2023, which took place in San Nicolas. It is at this event that leaders were presented with plans and project ideas for San Nicolas. Mr. Aldrich Croes of the commission Aruba Amenities presented a project that will take place at Seroe Colorado. This project involves a monument that shines a light on the role that Seroe Colorado, the oil refinery and our people played during the Second World War.

Mr. Croes explained that Mr. Dufi Kock, Aruban historian and winner of the “Silver Carnation”, presented the history of Seroe Colorado, the war and its victims. Mr. Croes further explained that Francis Gomes of the DOW presented plans for the infrastructure of the monument and how this will be linked with the district of San Nicolas.

“San Nicolas has businesses that have existed since the Second World War, so the district—along with the refinery—has many historical aspects that are valuable. The district will also play an important role in the eminent future once this piece of heritage becomes functional”.

Mr. Francis Gomes of the DOW expressed that the establishment is currently handling the infrastructure of the monument in order to lay its foundation. DOW is currently also planning parking lots and walking areas in order to create a single pathway between all areas of interest. At the site of the monument, there are old foundations of the artillery guns and the ammunition bunker, which the institution is considering renovating in order to create an additional experience in San Nicolas and the area of Seroe Colorado on its own. This will also be linked to the master plan for the area. The other phases of the project include providing artwork of the monument and building replicas of artillery guns at the site.

“It is important for both locals and tourists to learn about the important role that Aruba and the Lago refinery played during the war”, Mr. Kock states. Is it through this monument that is dedicated to 47 crew members who brutally lost their lives during the war on February 16th 1942 that the role of our people will be remembered.