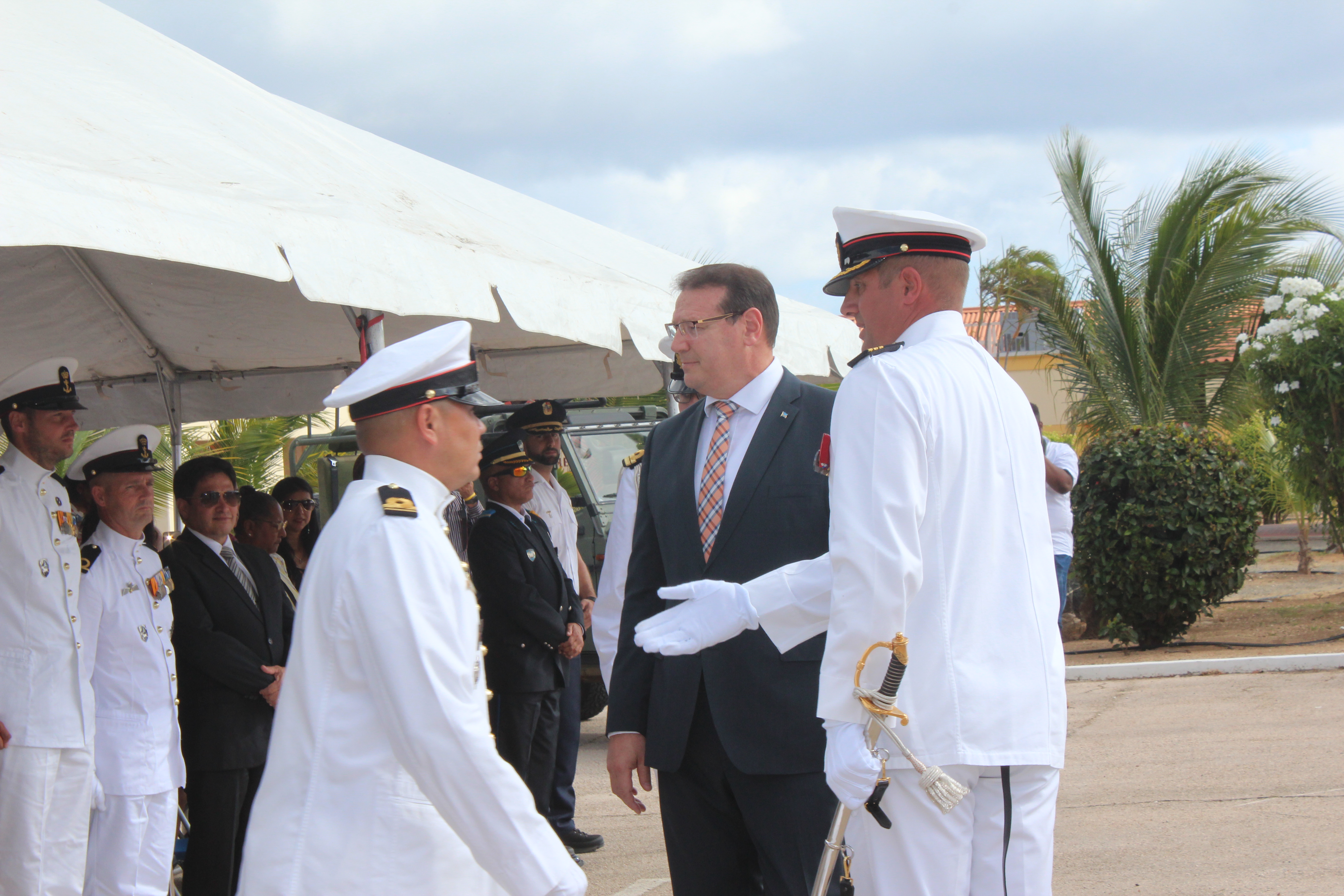 SAVANETA-“The simple fact that I am in this position where I am right now, illustrates that women can do everything that men can”, said Prime-Minister Evelyn Wever-Croes (MEP) to Aruba Today during an inauguration ceremony of Arumil, the Aruban military, recently. The ceremony was also related to the intention to accept women into the military.

A total of 13 Aruban militaries achieved the honor to serve their country as a military after finalizing the Arumil military school. Timon van Dishoeck, Commander in Chief of the Dutch Marines in Aruba, explained that there are more militaries to be inaugurated in a couple of months. From the moment a military is inaugurated and offers his commitment to Aruba, the Dutch Marine Base will be available with their services for any task, at any moment. A good example of this happened a couple of months ago when this ceremony was actually planned. However, due to the crisis that happened at that time on the island with a missing baby boy, Arumil postponed their ceremony and got to work to find the boy.

Social Reformation
Arumil also offers an opportunity to young people with social problems. “We offer a special program that gives them the opportunity to educate themselves and have a military career”, says the Commander in Chief. The program is rather intense because in nine months the boys will be trained and the physical part of this training is very good, but challenging. “The social formation does not require a knowledge of Dutch and after the education there is the option to enter into the military of Arumil to take it a level further.”

Of course there are young people who fall out, but it is up to each one’s character to persist to achieve or go back to their former life. The Prime Minister informs that the militaries that finished their four years education at Arumil are most welcome to work in government departments. “We need more people to help us in the field of security and at the same time we would keep you here where we need you and not wandering off to do jobs in other fields. We need all hands we can get in our fight against criminality.”

Women in the Military
The Netherlands already made it possible for women to join the military and Aruba should follow this example, states the Prime-Minister. “We can do exactly the same as men.” The fact that she herself is the Prime-Minister empowers this fact. The Minister of Defense of The Netherlands is also a woman: Ank Bijleveld. Both women are responsible for the Dutch Marine Base in Aruba. “Everything is ready yet, there is no reason not to allow women into the military”, says the Prime- Minister. From the part of the Commander in Chief there is no problem either: “We will need female instructors and a separate dorm for women, but furthermore I see no problems.”

Festival “A song for Aruba’s National Anthem and Flag” was a...

Unique collaboration of organizations for the reforestation of Aruba