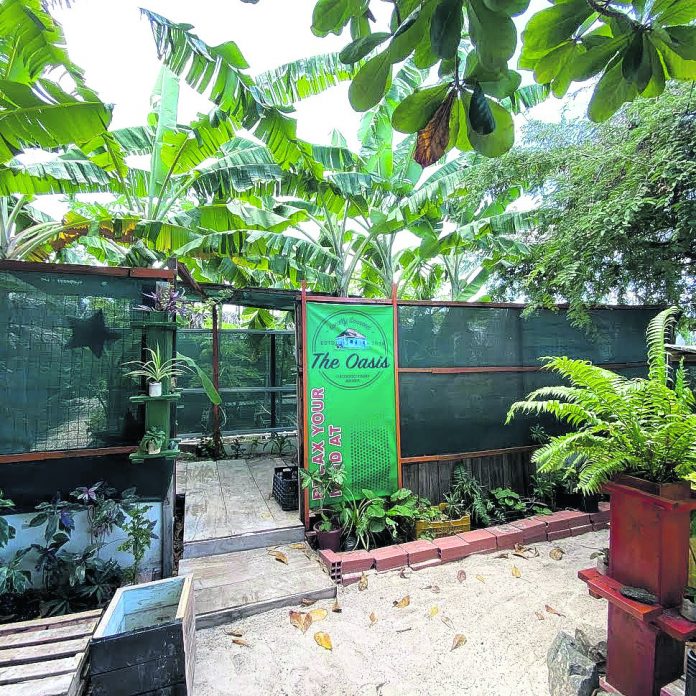 Oasis Farm is a beautiful concept, but the terrain south of the residence Pos Chikito 78 must be vacant in order to avoid calamity. This is what the director of the Department of Infrastructure and Planning (DIP), dr. Haime Croes, told our reporter.

Oasis Farm is a ‘self-sustainable’ farm in the area of Pos Chikito which was available to the public. However, recently controversy arose when authorities denied its manager, Mr. Rudsel Emer, permission to run the place.

This week, executives of the Department of Public Works (DOW) and DIP met with Mr. Emer to inform him that it’s not possible to keep the farm on that land, because it’s dedicated as a water passage to avoid that Pos Chikito floods in the event of heavy rain.

This doesn’t sound logical to Emer, because according to the horticulture and agriculture expert, his project doesn’t hinder the passage of water. On the contrary, he didn’t build anything permanent on the land and uses pallets and tires to plan so that it doesn’t interfere with the flow of water.

Emer is not owner of the house, but he leases the house and the land around the house for Oasis Farm. Around three years ago he asked for the piece of land south of the property. “I lease the house and I use the land around it. My intention was to apply the knowledge I received in Brazil to Aruba also and see if it’s possible to have agriculture,” Emmers said, adding that he has a vanilla plantation in Brazil and now he succeeded in Aruba.

Oasis Farm started placing tires on the land in question a few years ago, and back then, the activity caught the attention of the neighbors. He explained back then that he would use the land for agriculture and he would take the flow of water into consideration. He also explains that he made requests to DIP to use the land. He says that they even improved infrastructure in the house because even before he started putting in the plants in the terrain, the house would flood with heavy rains.

The first request to DIP was in 2016, and Emer says he didn’t get a reply. He decided to start anyway with plants in tires, and then on pallets, and filmed everything with a drone. With this video he came back to DIP in 2020, in order to formally receive the land. “They received the video, but no one told me I couldn’t continue.

Emers says he doesn’t understand, if what he was doing was illegal, that he wasn’t stopped before. Instead the plants were allowed to grow and began producing. “I understand that it was wrong of me to just take the land, but I didn’t build anything on it. I didn’t tie anything to the land and plants grow on land. I can move everything that is on the land, but why this whole time DIP didn’t say anything, while they knew what we were doing?”

Emer says that meanwhile DIP came to measure the land and told him he cannot have it.

On the other hand, DOW informed Emer and Oasis Farm that they were not aware of their activities. “This is impossible”, Emer says. “Impossible that DOW didn’t know because the plantation was there for three years already, and during that period, a water pump was brought in to take water out of the land, more than once.”

Emer’s vision for Oasis Farm is to have the same type of plantation that used to exist before in Fontein, where vegetables were produced for the community. He invested in osmosis technology to produce his own water to keep prices low, and the results were encouraging, particularly when the young people of Orthopedic Centre and also residents of (retirement home) Maristella asked to come and help. Oasis Farm was also very popular among kids during the summer vacation.

This is why Emer finds it hard to believe that the value of his project is not recognized, for its sustainability and its importance for the community.

But for DIP and DOW, the decision is made. The area must remain as a passage for water. Disaster management goes on another interest. This doesn’t mean that the effort for such a green project is not appreciated, and at least according to Haime Croes, as soon as a businessplan is presented, he will see how to help Oasis Farm with a different plot of land.

The director of DIP says that his task is to implement the law and correct what goes wrong, and he reiterates that DIP will cooperate as soon as they receive the necessary documents from the organization. “But not on that specific land. Not there. Calamity is a priority.”

Aruba to Me: Jim and Dawn Schwiesow

For the first time in our history Aruba welcomes a Mega...