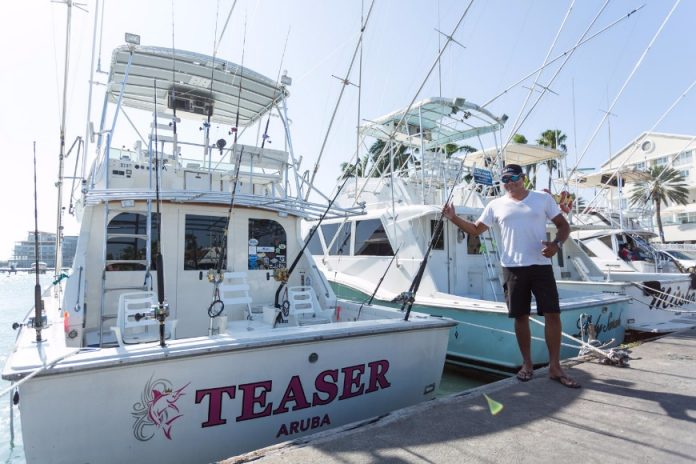 Winter may be coming, but Aruba’s fishing scene has never been hotter. With hurricane season officially over, December brings calmer winds and clearer skies to the island. The temperature is as pleasant as ever, hovering around the 87-degree mark. The best part is that December transforms Aruba into one of the best fisheries in the entire Caribbean.

In terms of sheer variety, the December fishing in Aruba is nearly impossible to match. Inshore, offshore, on the reefs and flats, the plentiful Aruban waters have something for every angler.

If you’re into flats fishing, you’ll be in for a treat. December is traditionally great for Permit fishing, not just because the fish come close to shore, but because the weather is amazing for it. December is one of the driest months in Aruba, meaning that you’ll have no trouble spotting those feisty flats monsters.

The Aruban signature species, the Wahoo, is as abundant as you’ll ever see it. Other reef fish like Barracuda and King Mackerel are also on the bite.

Offshore, Sailfish and White Marlin continue their feeding frenzies. If you’re lucky, you can snag a Blue Marlin while you’re at it, and complete a Billfish Grand Slam! If Billfish aren’t your thing, how about some tasty Mahi, Blackfin Tuna or even Red Snapper? The Aruban coast is dotted with seafood restaurants that will turn your catch into a memorable gourmet experience.

Captain Milton aboard Teaser Charters has been reeling fish in left and right these last couple of weeks. On a recent outing, the captain and his guests caught a huge Wahoo just ten minutes from the dock. On the way back, the party snatched a nice Blackfin Tuna, which they brought to a local restaurant for dinner to round the day off.

Captain of the Month – Milton Pichardo.
Coming from a long line of fishermen, Captain Milton has been fishing the Aruban waters ever since he was a kid. He earned his stripes helping his older brother as a first mate, and started his own charter business at the age of 20.

You’ll spend your outing with Captain Milton aboard the beautiful Teaser, a 35’ Bertram sportfisher. Powered by two 315 HP Cummins engines, this vessel can carry 6 passengers and has all the amenities you’ll need for a comfortable outing on the water. Among other things, the Teaser boasts an enclosed toilet, a fighting chair, life jackets, and air-conditioning.

The Captain enjoys showing beginners how to fish, so feel free to bring your kids along. At the end of your outing, you’ll split your catch 50-50 with the crew. To make your experience complete, the crew cleans and fillet your fish, so you can enjoy it over a beautiful Aruban sunset.

“There’s a whole host of species on the bite”