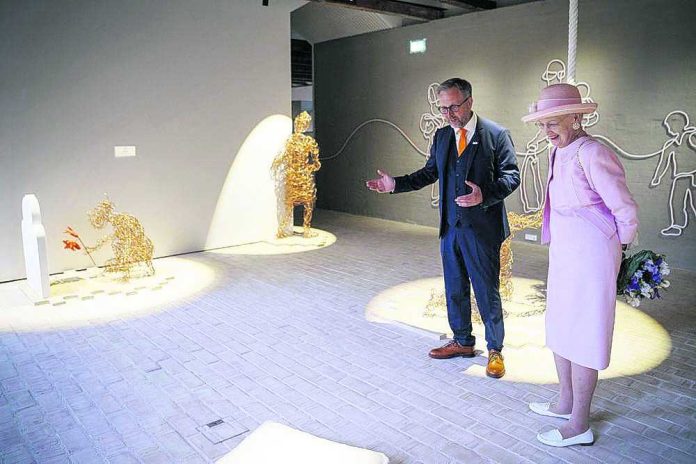 COPENHAGEN, Denmark (AP) — Denmark’s Queen Margrethe opened a new museum Saturday that tells the story of the generations of refugees who have shaped Danish society, starting with Germans who fled the Soviet advance during World War II.

Flugt — Refugee Museum of Denmark was created on the site of a camp in Oksboel, a town in southwestern Denmark, that housed up to 100,000 refugees from Germany in the postwar years.

Flugt — which means escape in Danish — also tells the story of immigrants from Iran, Lebanon, Hungary, Vietnam and elsewhere who fled their homelands and found shelter in the Scandinavian country. They tell their stories in their own words on large video screens.

“Being a refugee is not something one decides. It is not one’s personal choice, it is something that happens,” Sawsan Gharib Dall, a stateless Palestinian who was born in a refugee camp in Lebanon and lived there until she fled and arrived in Denmark in 1985, says in one video.

Curator Claus Kjeld Jensen explained that the aim of the museum is “to turn numbers into people and convey the completely universal issues, emotions and many nuances associated with being a person on the run.”

The museum was designed by prominent Danish architect Bjarke Ingels and consists of a curved modern building of wood and glass that links two older brick annexes that were hospital buildings in the postwar years.

Ingels has said that the new museum has become more relevant as Denmark has recently accepted refugees fleeing Russia’s war in Ukraine.

Outside the museum, a path guides visitors past plaques describing the fates of the Germans who sought shelter in the camp, called Oksboellejren, between 1945 and 1949. Most of them eventually settled in West Germany but a cemetery on the site has become the final resting place for those who died there.

The museum, which opens to the public June 29, was financed by private donations and the German government, and German vice chancellor, Robert Habeck, represented his country at Saturday’s opening ceremony.

It is located 275 kilometers (170 miles) west of Copenhagen but just 95 kilometers (60 miles) from the border with Germany.

Denmark was a haven for refugees in the past. Of Denmark’s 5.8 million people, more than 650,000 are immigrants, while 208,000 are listed in the state statistics as descendants of immigrants.

However, the country in recent years, with large-scale migration a source of angst in the Western world, has sought to place limits on the number of newcomers that it accepts. It has at times attracted international criticism for the way it has tried to discourage them from trying to settle there.

Wedged between Germany and Sweden, Denmark only took in a small part of the more than 1 million people who arrived from Africa and the Middle East in the migration crisis year of 2015.

More than 11,500 people applied for asylum in Denmark, while 1.1 million did so in Germany and 163,000 in Sweden. Many saw Denmark only as a transit point because of the tough Danish stance.

In 2016, a law was passed allowing authorities to seize jewelry and other assets from refugees to help finance their housing and other services. In practice, it has been implemented only a handful of times.

Denmark also revoked the residency permits of some Syrian refugees by declaring parts of Syria “safe,” and toyed with the idea of opening camps for asylum-seekers in Rwanda.

Denmark still has no deal in place for sending asylum-seekers to Rwanda. However, Britain, which had similar plans, had to abort its first planned flight of asylum-seekers after the intervention of the European Court of Human Rights, which cited “a real risk of irreversible harm.”

According to official statistics, 2,717 people have sought asylum in Denmark this year.