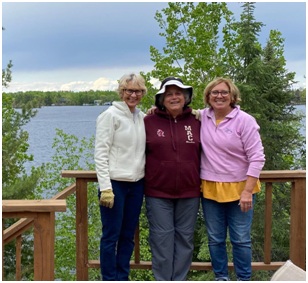 Ruth Harms was born in Aruba, Margaret Kelberer was born and raised in Beirut, Lebanon. They met at the American Community School (ACS) in Beirut in 1972, 50 years ago. Margaret’s dad was an executive with Arabian American Oil Co (Aramco) in Dhahran and Ruth’s dad was the head of the Computer Department of Esso Libya in Tripoli. 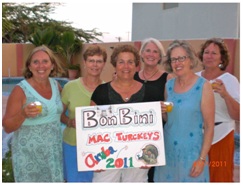 Margaret had attended ACS since first grade. Ruth had graduated from the Oil Companies (middle) School in Tripoli in 1970 and before that, had attended five different schools in Aruba, Kansas, New York and Venezuela. She had attended Près Fleuris in Bluche sur Sierre, Switzerland the last two years, but decided to transfer to ACS.

Margaret and Ruth formed a close friendship and decided they would together attend Macalaster College in Margaret’s home state Minnesota. During their four years at Macalester both lived in Turk Hall where their friendship blossomed. Together with the other students who lived on the second floor they called themselves the Turckeys and formed a bond of friendship that has lasted the decades to this date.

Ruth became like another sister in the Kelberer family and often went to spend time with the family in their vacation bungalow near International Falls at the border of Canada. On various occasions Margaret also accompanied Ruth on vacations in Aruba.

In the intervening 50 years, Ruth and Margaret continued to see each other at least every other year and watched each other’s children grow. Margaret was a bridesmaid at Ruth’s wedding in 1979 and Ruth was present at Margaret’s wedding.

Margaret and husband George Leiter spent two years as teachers in Trinidad and Tobago and during that
period they visited Ruth’s parents in nearby Aruba a couple of times.

When Ruth’s dad celebrated his 90th birthday, Margaret and George returned to Aruba to join the fun. They also hinted they were interested in purchasing the property. Four months later, when Annie, Margaret’s youngest sister was going to reach 50, the sisters arranged to celebrate the big event in Aruba at Milagro’s Garden Apartments, an Airbnb that Ruth’s father operated. The interest in purchasing the property turned into an oral offer to purchase. A few weeks later a contract of Sale and Purchase was signed.

On April 11, 2022 the Notarial Deed of Sale was signed and Ruth came to Aruba to be present at this historic moment. Margaret became the owner of the house where Ruth’s godmother had lived for many years and where Ruth’s father had lived since 1987. The friendship that had started half a century before in Beirut had come full circle in Aruba.

Vincent and Joan Buzzetta from Florida were recently honored as Goodwill...

Liz Weston: What to do if you save too much for...