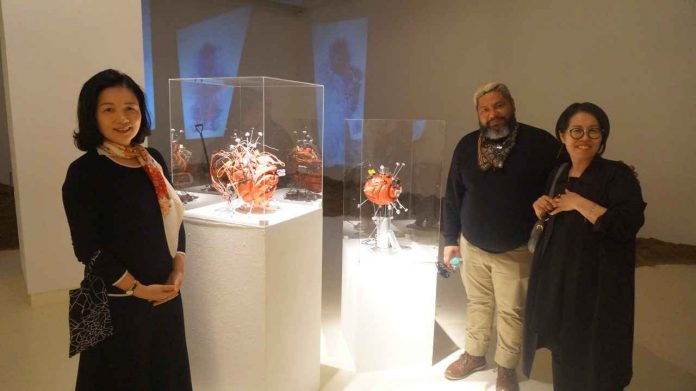 Civic integration as art: the absurdity of integrating as a Venezuelan in Aruba

ORANJESTAD – “Integration in Aruba is pretty absurd. You have to comply with rules that are not even from here, but from the Netherlands. And if you are talking about Aruban culture; at Christmas they traditionally eat ayaca here. That dish comes from Venezuela. ”

Nelson González is an artist, born in Venezuela and 17 years residing in Aruba. He is married to an Aruban and has four children. “Her family was very happy that I came from outside. Because on the island almost everyone is related. ”

Because of this embrace of his Aruban family, but at the same time his (often negative) experiences as a Venezuelan on the island that are related to the situation in his native country, González devised a new art method: integration as art and art as integration.

With success, because after years of struggling to get funding for his work on the island, he got it from the Netherlands. As a result, he has exhibited work in Cuba, Santo Domingo, the Netherlands and even South Korea, among others. “So I represent Aruba abroad, but without their contribution because I receive support for my art from the Netherlands. But for the Aruban immigration officer recently, I am considered a Venezuelan again. ”

The artist refers to his most recent experience with what he sees again as evidence of increasing discrimination on the island against Venezuelans. “I would fly to Miami on business. The US allows me because I have a business visa. Moreover, US, likewise more than 60 countries in the world, has an agreement that Venezuelans can also enter with expired passports. ”

After all, Venezuela has two governments and the situation makes it very difficult for Venezuelans abroad to get their passports renewed. González: “I had already passed US immigration at the airport (Aruba has a pre-clearing system for America), and had a stamp in my passport from the Aruban immigration. But then the Aruban immigration officer refused to let me leave. ” He has been working for weeks to get clarification from the Aruban government. Justice Minister Andin Bikker says that if Venezuelans have a valid residence permit, their identity is known, and are admitted to the country of destination, they will also be admitted to Aruba with an expired passport. Where this went wrong with González remains unknown, as the justice department only gives vague answers.

“Venezuelans are now the lowest layer in Aruban society. We are good for sex, cheap work that no one wants to do, many times work that is then not paid. I’m not saying this as xenophobic; my children are half Aruban and my Aruban family allowed me to further develop myself as an artist. But it is unfortunate that the value of Venezuelans as people and individuals is determined by the political and economic situation. ”

González does have hope: “I am sure that if things go well in Venezuela as it was 35 years ago, that appreciation will come again.”