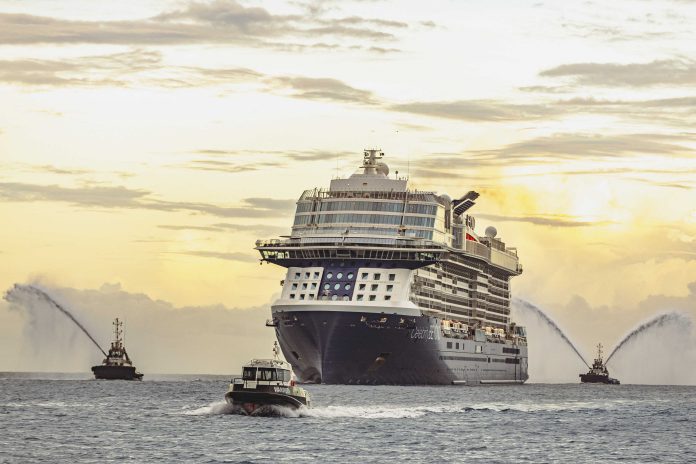 Last Tuesday, several cruise ships could be observed docked in Oranjestad. Director of Aruba Ports Authority, Marc Figaroa described this as a great day for APA as well as for Aruba.

Among them was the Celebrity Beyond, which arrived in Aruba for the first time. APA is very proud because this is one of the newest cruise ships of the Celebrity Cruises line, which joined the Celebrity fleet in April of this year. The cruise ship was welcomed along two others in the port, namely Carnival Horizon and another one of Holland America Line.

For APA, Celebrity Beyond is a very modern ship and is carrying almost 2,500 passengers aboard. Marc Figaroa said that the most important part is that cruise tourism is recovering as desired. He is convinced that Aruba will see a very strong season in November, December, January and February – the winter seasons.

Aruba Ports Authority celebrated the arrival of Celebrity Beyond and Norwegian Prima, which arrived in Aruba last Saturday. Figaroa said he is satisfied with the developments for cruise tourism in Aruba. There are still three other first calls for this year: one from Royal Caribbean, another one from Norwegian, and finally one from Azamara.

Figaroa indicated that he is expecting a very strong season for cruise tourism, as he indicated before. “Let’s hope that there will not be any other external impact affecting the cruise tourism sector. For us, it is very important to continue being careful so that Aruba’s economy can progress and recover from the Covid pandemic.”

Still more for this year

The arrival of new cruise ships for the first time in Aruba will continue the following weeks before the end of the year. For example, recently Aruba saw the arrival of Carnival Spirit, of the Carnival Cruise Line company. This 21-year-old cruise ship cost $375 million to build, and ir carries 2124 passengers on board.
This week Aruba recevied the Celebrity Beyond, and the Azamara Onward is still to come. It’s good to add that Celebrity Beyond begain sailing last April, meaning it is very new. It is in the Edge-Class category and has a capacity for 3937 passengers.

Azamara Onward is a 23-year-old cruise ship, which can carry 826 passengers on board, is 181 meters long, and is in the R-Class category, operated by Azamara Cruises since this year.

Celebrity Beyond is a cruise ship belonging to Celebrity Cruises, which takes its name from the slogan of the company. The ship, which is the third in the Edge class, was built in Chantiers de l’Atlantique and began its service last April. This ship is under the care of Captain Kate McCue.

The cruise ship is registered at the port of Valleta, in Malta. It is 326.5 meters long, 57.9 meters high, and has no less than 21 floors. It has a capacity for carrying 3260 passengers on board, based on double occupation, reaching a maximum of 3937 passengers, as well as 1416 crew members on board. So when it’s docked, it brings a total of 5353 people.

Aruba Ports Authority NV was founded in 1981. The company belongs 100 percent to the government of Aruba and has been in direct service for 80 years. Together it manages the two ports in Aruba, namely the cruise terminal in Oranjestad as well as the cargo terminal in Barcadera, where they have an operations agreement with ASTEC. Each year around 330 cruise ships arrive in Oranjestad and another 905 cargo ships to Barcadera, not counting small ships and launch services. The company is stable and is under management of Marc Figaroa.

Short history of the beginnings of baseball in Aruba

The Power of Forgiveness