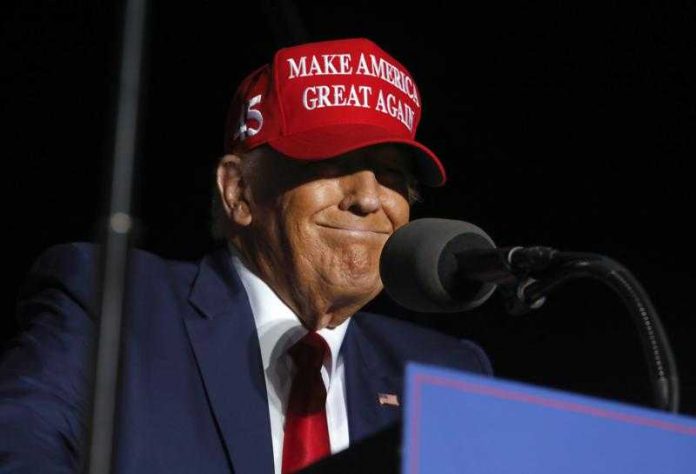 WASHINGTON (AP) — Republicans are eyeing major gains in Tuesday’s elections and appealing to supporters over the final weekend of the 2022 campaign to punish Democrats for high inflation and crime rates that have risen in parts of the country. Top Democrats, including President Joe Biden and his party’s two most recent White House predecessors, said the prospect of GOP victories could undermine the very future of American democracy.

More than 39 million people have already voted in an election that will decide control of Congress and key governorship. Biden was campaigning in suburban New York on Sunday evening, a day after former Presidents Barack Obama and Bill Clinton made closing cases to voters.

Rep. Sean Patrick Maloney, head of the Democrats’ House campaign arm, is in a tough contest for his seat north of New York City. But he insisted Sunday that Democrats are “going to do better than people think on Tuesday,” adding that his party is “not perfect” but “we are responsible adults who believe in this democracy.”

“I think this race is razor-close and I think everybody who cares about the extremism in this ‘MAGA’ movement — the racism, the anti-Semitism, the violence — needs to get out and vote and that’s not just Democrats, it’s independents and fair-minded Republicans,” Maloney told NBC’s “Meet the Press,” referring to Trump’s “Make America Great Again” slogan.

Florida Sen. Rick Scott, who heads the Republicans’ Senate campaign arm, countered: “We have great candidates. People are showing up to vote.”

“There’s no energy on the Democrat side,” he said on NBC. “This election is about the Biden agenda.”

Former President Donald Trump, who planned a Miami rally later Sunday, hopes a strong GOP showing on Election Day will generate momentum for the 2024 run that he is expected to launch in the days or weeks after polls close.

Scott will be at that rally. Not invited, though, is Florida’s Republican governor, Ron DeSantis, who is running for reelection against Democrat Charlie Crist and is widely considered Trump’s most formidable challenger if he also were to get into the White House race.

In Pennsylvania on Saturday night, Trump said he hoped the GOP would have “an historic victory” in the midterms. But DeSantis also was on his mind — he referred to the governor as “Ron DeSanctimonious.” It’s a rivalry that’s been simmering for more than a year as DeSantis has taken increasingly bold steps to boost his national profile and build a deep fundraising network.

DeSantis, who became a popular national figure among conservatives during the pandemic as he pushed back on COVID-19 restrictions, shares Trump’s pugilistic instincts. By most measures, Trump remains easily the most popular figure in the Republican Party. But many Trump supporters are eager for the prospect that DeSantis might run, seeing him as a natural successor to Trump, without Trump’s considerable political negatives.

Trump has privately groused about DeSantis for failing to say definitively that he will sit out the race.

When Joe O’Dea, the GOP candidate for Senate in Colorado, said he would prefer someone other than Trump as the 2024 nominee and cited DeSantis and others, Trump slammed O’Dea on social media: “MAGA doesn’t Vote for stupid people with big mouths,” Trump said.

For national Democrats, the focus is on the fate of their narrow control of the House and Senate.

Voters may rebuke the party controlling the White House and Congress amid surging inflation, concerns about crime and pessimism about the direction of the country. History suggests the party in power will suffer significant losses in the midterms.

“So much is at stake in this election,” she said Sunday. “We must speak up on justice and democracy.”

Vice President Kamala Harris, campaigning in Chicago, said, “These attacks on our democracy will not only directly impact the people around our country, but arguably around the world.” She said America’s democracy ”will only be as strong as our willingness to fight for it and that’s’ why we’re all here today,” adding, “because we are prepared to fight for it.”

Trump has long falsely claimed he lost the 2020 election only because Democrats cheated and has even begun raising the possibility of election fraud this year. Federal intelligence agencies are warning of the possibility of political violence from far-right extremists.

Obama, who joined Biden in Philadelphia on Saturday, noted that generations of Americans died for democracy and said, “You can’t take it for granted.” Biden himself said: “We have to reaffirm the values that have long defined us.”

At a New York rally for Gov. Kathy Hochul, who is seeking her first full term, Clinton said the loss of House and Senate control by Democrats would have “enormous consequences.”

Ronna McDaniel, the Republican National Committee chairwoman, said Democrats were “inflation deniers,” trying to deflect the other side’s branding of her party as anti-democracy for rejecting the results of 2020′s free and fair presidential election simply because Trump lost it.

“If we win back the House and the Senate, it’s the American people saying to Joe Biden, we want you to work on behalf of us and we want you to work across the aisle to solve the problems that we are dealing with,” McDaniel told CNN’s “State of the Union.”

Lee Saunders, president of the American Federation of State, County, and Municipal Employees, the nation’s largest union of public employees with 1.4 million members, has been traveling the country rallying for Democrats. He said, “It’s going to be hard, it’s going to be tough but we aren’t giving up hope.”

Turning outrage into power: How far right is changing GOP