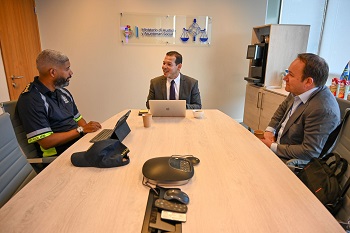 On January 10, 2023, the Minister of Justice and Social Affairs, Mr. Rocco Tjon, held an evaluation meeting with the new Senior Prosecutor, Mr. Erades, and the Chief of Police, Mr. Arnhem, to discuss the past torch parade.

Additionally, they met with the director of ELMAR to discuss the options to increase security in Aruba by installing CCTV cameras on light posts to protect carnival participants and onlookers. They also talked about the project, Safe neighborhoods, for which they approved the installation of street illumination in multiple areas two weeks ago.

As indicated by the Police Department, there were more arrests during this year’s torch parade compared to the last held Torch parade in 2020, although the seriousness of these incidents compared to 2020 was less. The Police arrested 19 individuals for a variety of incidents. The most frequent incidents were public disturbances, like public intoxication.

The Police were also present on the outskirts of the parade route and were present with their motor unit. According to the Police, the message to use a designated driver when drinking reaches more and more people, and fewer people are driving under the influence. All in all, the police are satisfied with the community’s behavior during the last torch parade.

Although the 19 arrests generated Awg. 11.400,00 for the Government, the objective of the “Faya bo Haya” program is not to generate money but to guarantee safety for everyone and make sure everyone gets home safe and sound after the parades.

Honoring of the Smith family as Goodwill Ambassadors