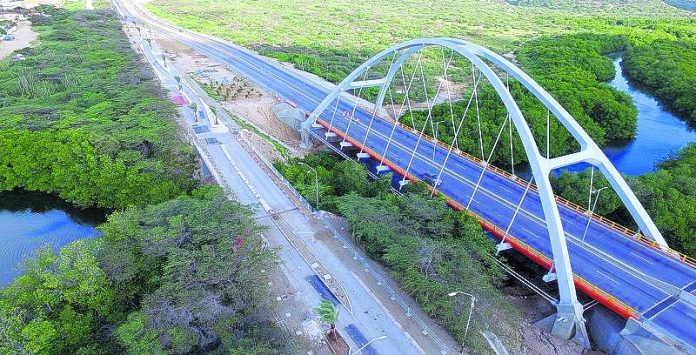 During a press conference Wednesday morning, the Department of Public Works (DOW) announced that from next Monday, July 25th, the road on the bridge of Green Corridor will be closed for maintenance. Director of DOW, Mr. Marlonm Maduro, together with representatives of Arubus and Caribbean Infrastructure Company (CIC) gave information regarding the upcoming work.

To carry out this work, Croes mentioned that there are various challenges that must be confronted. He explains that he sat together with all stakeholders – which is DTI (Technical Inspection Department), KPA (Police Force) and Ambulance, because in order for the maintenance work to take place, they need to close the entire bridge.

Regarding the redirection of traffic, he explains that the old bridge will be used, known as the TeleAruba bridge. Also traffic from San Nicolas to Santa Cruz and vice versa can make use of Mondi Fierno, Franse Pas.

The director of DOW also mentioned that they reached an agreement with emergency services, Police Force, Fire Department and Ambulance, that in case they need to use the bridge, there will be close communication with the contractor in order to give them access so they can use the bridge even as the maintenance is being done.

Sannin Daou, spokesperson for Arubus, informed the community and everyone who uses the services of Arubus, that the normal bus route will be redirected. At the roundabout in Pos Chikito, it will pass on the inside and go back out at the roundabout in Drive-In, and from there it will follow the usual route. These changes are specifically for the bus lines 1, 2 and 3, which travel between San Nicolas and Oranjestad.

He commented that when the bridge opens again, from 7pm onwards the busses will pass the normal route on the big bridge again. He emphasizes that everyone who uses the bus service must be aware of the change in the route and where they need to take the bus.

Daou called on other automobilists, specially truck and bus drivers, to be more careful on the small bridge, seeing as it is more dangerous as it has limited visibility. “We understand that there will be people there to indicate who has preference. So from our side, we want to pay more attention to automobilist safety, truck drivers please be aware that there will be people standing there to indicate who has preference, in order to avoid accidents”, he added.

Lysander Wernet, project coordinator and representative of CIC, explains that from their side they will have their own workers available to help direct traffic in coordination with the Police Force. Already they reached some agreements to direct the traffic when necessary, particularly on the small bridge, the TeleAruba bridge.

Wernet indicated that the initial idea was to close the bridge partially, but if this was done, the hours to work will also be more limited and the execution of the work will take around four weeks. Seeing as they will completely close the bridge because of security reasons, the contractor together with CIC came to an agreement to complete the work in two weeks.

He commented that the bridge is in good condition and the works are taking place simply because a bridge with a metal structure needs preventative maintenance regularly, and regarding the established plan, this has to be every five years.

Wernet asked the community for their understanding while the necessary works are being carried out. “We ask for the understanding of the community because these works are essential for the durability of the bridge. In a short time, two weeks, we will do everthing that’s possible to complete the work”, he said.