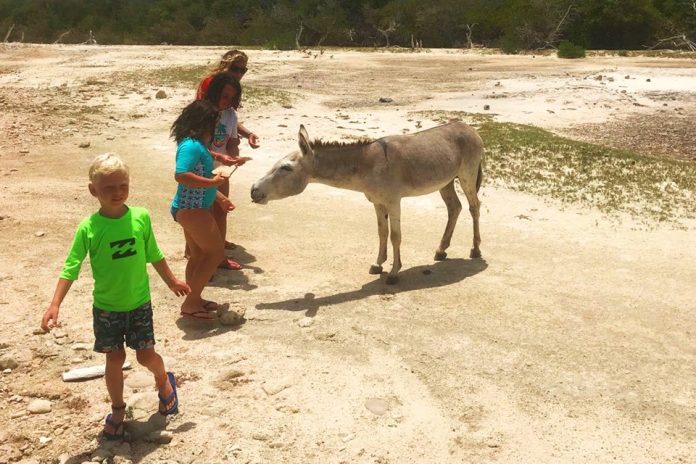 In this episode we want to raise awareness about the “Burico” because if there is an animal that has been mistreated forever are them. Donkeys (Equus asinus) are not native to Aruba and arose from the domestication of the North African wild ass (Equus africanus) more than 10,000 years ago -practically at the same time as the Eurasia horses- since then they have been used as pack animals, mount and why not say it for ridicule!

The first ones to catch the wild ass were the Egyptians, for them the donkey represented ignorance to which they alluded by putting an elaborate “donkey’s head” on those who, due to their ignorance, deserved it, as they also considered donkey`s as a symbol of strong winds and bad omens and was usually mistreated.

During the Roman Empire the donkey was not only considered bad luck but there was also a fable about the god Jupiter, who had sent mortals on donkey back “the treasure of eternal youth” However the long journey tired the donkey and took the chance to stop to drink some water from out a fountain nearby where a snake was enjoying the freshness of the water. By seeing the it said, “Donkey give me that what you are carrying on your back and I will let can drink of my fountain! So the tirsty and tiered donkey did not hesitate to exchanged the treasurehe of eternal youth it was carriying for a few “sips” of fresh water. From that moment on, snakes obtained the privilege of changing their skin, thus recovering the freshness of youth by sheding it old skin, while we mortals age.

Getting a little closer in history approximately the year 1000 B.C. the donkey became the common means of transport in Egypt, Asia and Europe from where they brougth to America.Thus our “buricos” friends arrived through with the Spanish on “The happy island” providing our forefathers with the main means of transportation. Donkeys also beame a commodity, since having many donkey`s ment that they could be used as exchange measure because money was scarse, so the fortune of a person in particular, farmers and merchants could be parcialy mesured according to the amounth of “buricos” during Aruba’s colonial era.

With the arrival of the automobil our friend the donky was slowly but surly discarted for its once great preformance and peace full and careless cucuco life at home. Some were let loose others escaped their owners, formed separate paks, reproduced, roamed the Nortern coastal ares of the island freely. However the ocational suffering did not end right away. Many where killed by cars during darker hours others where pisoned since they created havoc when entering plantations and private gardens of residential ares, eating everything, tumbeling gabage canisters etc. Others ran the bad luck to be cought sold as meat for tiger and lions when an ocational circus visited the “happy island” . Many where also killed by dogs and other accidents. Visiting children having fun with the Buricos at the Donkey Sanctuary

Finally and fortunately in 1997, “Stichting Salba Nos Burico” was founded, aka “Save Our Donkeys Foundation” thus emerging a place where injured or displaced donkeys where receined with open arms and a big lovely heart

Years later it began to be known as the Donkeys’ Sanctuary a place where they are taken care of and where they can enjoy the affection and love of those who visit this sanctuary on a daily basis.

If you love Aruba, its origins and it’s cultural heritage we encourage you to do something different outside the tourist grid. Become one of the exclusive and limited visitors of Etnia Nativa a private residential set up where you will be able to touch and be touched by authentic Aruba, admiring native art collections, archaic as well as archaeological artifacts, colonial furniture and items you’ll enjoy inside a recycled enviroment fully of peace and relaxation.

Etnia Nativa is since 1994 the home of Anthony, our columnist, artist and island expert who guides and lectures his guests through his resplendent home. Visitor finds an authentic glimpse of native Aruba. Something completely different for a change, a contemporary native experience!

Beautiful places from all around Aruba

Heritage, an enabler of Sustainable Development