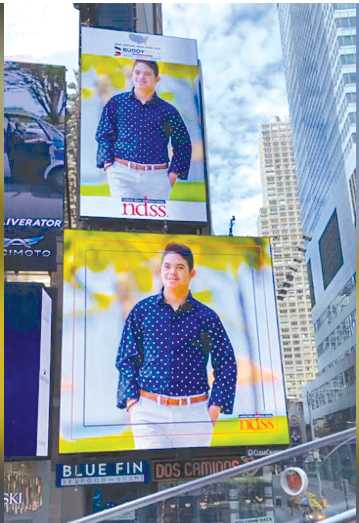 The month of October is Down Syndrome Awareness Month where we celebrate Down syndrome and let everyone know their abilities and that they are capable of doing anything they set their minds to. To kick off the Down syndrome awareness month, the National Down Syndrome Society (NDSS) held the event Times Square Video Presentation on Sunday, September 20th, 2020. Two Arubans are starring in this event.

The purpose of the video is to promote acceptance and inclusion of these special need children in our society. Shawndre Geerman and Regina Janga of Aruba had the privilege to be featured on the giant screens of Time Square Gardens, which featured over 500 children and young adults.

Since 2013, Hans Geerman, President and Director of the Fundación Sea Bunita Sea Bo Mes, meaning ‘Be beautiful, Be Yourself’, has been working on Aruba to change the way people see individuals with Down syndrome. “We started organizing different events to make the Aruban community more aware of integration and inclusion for people with Down syndrome,” Geerman said to culturaruba. Originally, the foundation operated under the name Ban Papia,, which means ‘Let’s Talk’, until an influential trip to Denver to attend Global Down Syndrome Foundation’s 2015 Be Beautiful Be Yourself Fashion Show, where his son Shawndré modeled. The visit proved so inspirational that Hans decided to bring that experience back to the island. “After the event, we returned to Aruba and sponsored the first Aruba fashion show as Fundación Sea Bunita Sea Bo Mes (Be Beautiful Be Yourself Foundation),” he said. “The show starred members of our community with Down syndrome as models and local business and media personalities as their escorts. The event was a sellout, and the feedback has been positive beyond what we could hope it would be”, as he said in an interview with culturaruba.

The NDSS is the leading human rights organization for all individuals with Down syndrome. NDSS was founded 1979 by Barton and Betsy Goodwin when they found out that their daughter Carson Goodwin who was born to in 1978, had Down syndrome. The Goodwins dedicated themselves to gathering as much information as possible and creating opportunities for Carson to grow and learn like any other child. They soon discovered that support and resources available to parents of a child with Down syndrome were very limited. Betsy began collaborating with her close friend, Arden Moulton, and in 1979 the National Down Syndrome Society (NDSS) gained official nonprofit status.

What is Down Syndrome?

In every cell in the human body there is a nucleus, where genetic material is stored in genes. Genes carry the codes responsible for all of our inherited traits and are grouped along rod-like structures called chromosomes. Typically, the nucleus of each cell contains 23 pairs of chromosomes, half of which are inherited from each parent. Down syndrome occurs when an individual has a full or partial extra copy of chromosome 21. This additional genetic material alters the course of development and causes the characteristics associated with Down syndrome. A few of the common physical traits of Down syndrome are low muscle tone, small stature, an upward slant to the eyes, and a single deep crease across the center of the palm – although each person with Down syndrome is a unique individual and may possess these characteristics to different degrees, or not at all.

How common is Down Syndrome?

NDSS’ Health and Wellness Program is dedicated to HEALTH, the most important and critical human right.

Health and Wellness includes their National Buddy Walk Program, the premier advocacy event for Down syndrome in the United States and the world’s most widely recognized public awareness program for the Down syndrome community, the Athlete Ambassador Program and Charity Racing Teams, and Healthy Community Programs including Racing for 3.21 on World Down Syndrome Day.