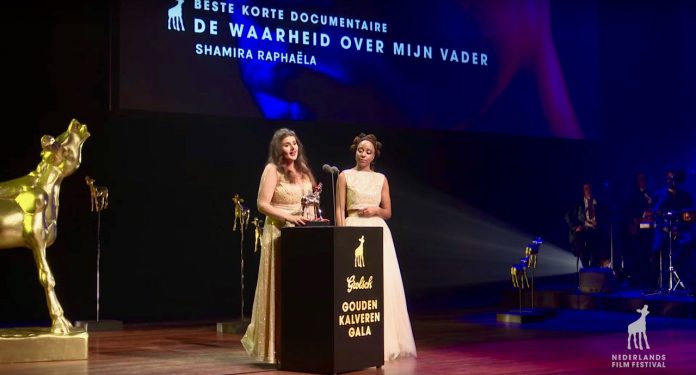 The prestigious Golden Calf (in Dutch Gouden Kalf) award is the award of the Netherlands Film Festival, which is held annually in Utrecht. For her documentary ‘Daddy and the Warlord’ the Aruban Shamira Raphaëla won the prize which makes her the fourth ‘islands child’ ever winning the wanted award.

About the documentary.
The family of Clarice Gargard, born in 1988, comes from Liberia. In ‘Daddy and the Warlord’, the young journalist asks about her father’s involvement in the war crimes of the convicted rebel and ex-president of Liberia, Charles Taylor. For Gargard her father was an idealist and role model. But was he really interested in rebuilding his country, or was he corrupting himself with money, fame, and power? The story unfolds slowly – and Clarice increasingly loses herself in the search for her own truth, while her father’s story turns out to be more complex and harder than ever thought.

With this documentary Raphaëla gives a voice to war victims. She has made more films, among others about her late father who had a drug addict history. In ‘Deal with it’ she unfolds the chaotic and colorful world of her father Pempy, a drug dealing addict, and her brother Andy, who’s following in his father’s footsteps. They both counter their seemingly desperate lives with lots of resilience and humor. Simultaneously, it’s impossible for Raphaëla to remain unaffected by the vicious circle trapping her father and brother.q