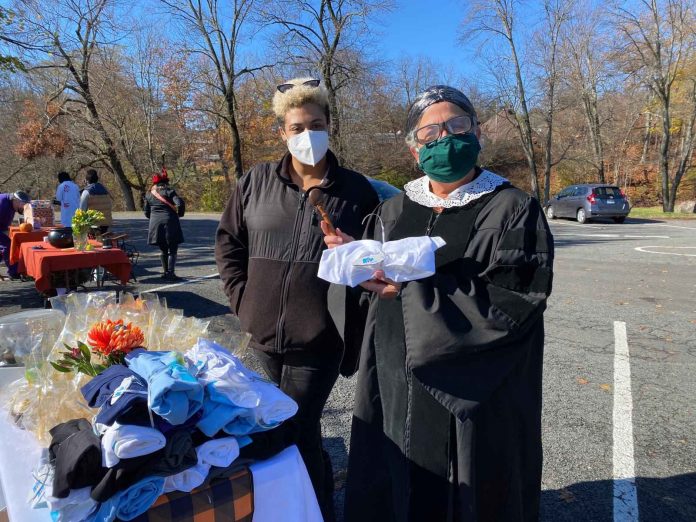 By Tiffany McGee and Sarah Hickman

Last week Jessie Cooley, director of Big Brothers Big Sisters of Hampshire County, sent out invitations to thousands of people and businesses reading: “If you know Ruth, you know that her enthusiasm and commitment to the ‘Bigs’, the ‘Littles’ and their families involved with BBBS are second-to-none. She is as dedicated to her work today as she was when she began thirty years ago. She has decided to retire from Big Brothers Big Sisters at the end of 2020. We will be so sad to see her go, and we can’t imagine BBBS of Hampshire County without her. We prepare to say farewell in December, but for now, we want to celebrate her with an awesome party! A fun-filled, festive, COVID-safe drive-by celebration for Ruth on October 31st beginning at 1pm.”

The date for this celebration was not chosen at random. Halloween has always been Ruth’s favorite festivity and over the years she organized many fund-raising activities for BBBS on Halloween. The organizers of the festivity chose 30 things that Ruth loves, not necessarily connected to BBBS, and prepared a packet representing each. For instance, Ruth’s love for the yearly Daffodil Run to raise funds, was represented by a bag of daffodil bulbs. They had packets representing the yearly Bowl-a-thon, the Crafts Fair, Summer camp for the “Littles” and the Barbecue. They also prepared packets related specifically to Ruth’s personal love, like her love for Aruba. As the cars lined up at the entrance of the park, each one received a packet to be delivered to Ruth when they reached her court.

The love and dedication Ruth has put into Big Brothers Big Sisters for the past 30 years were very apparent on Saturday. Uncountable members of the community, ‘Bigs’ and ‘Littles’ and their families, and even a State Representative showed up to show their gratitude.

A long line of honking caravan of cars decked out with balloons and congratulatory messages to Ruth (some even decorated with an Aruban flag), and carrying the gift packets attached to a balloon, drove by the circle where Ruth, dressed as the late justice RBG, held court.

There they stopped to deliver the retirement gift packet or a donation to BBBS, and in turn, receive an Aruba T-shirt and a souvenir keyholder, courtesy of the North-American branch of ATA (Aruba Tourism Authority). Everything from the decorations on the cars, to the the costumes people were wearing and the gifts handed out of the windows showed how much Ruth has really meant to the community, and how much she is cherished for the impact she has made with the children and families served at Big Brothers, Big Sisters.

In separate citations presented by a member of the Legislature, the Massachusetts House of Representatives let it be known that it offered to Harms its unanimous congratulations: “In recognition of your exemplary work and retirement after 30 years.” And the State Senate extended its congratulations: “In Recognition of Your 30 Years of Dedicated Service to Big Brothers, Big Sisters of Hampshire County.”

Harms was recognized on several occasions. In 2015 the Northwestern Children’s Advocacy Project honored her with the prestigious Ellen Sedlis Award which is presented annually to “someone whose work demonstrates a long-term commitment to helping children recover from abuse” and the Senate of the Commonwealth Of Massachusetts presented her with a Citation that reads “In recognition of her outstanding dedication and many valuable contributions for years to Big Brothers Big Sisters of Hampshire County.” Ruth was also decorated with membership to the Royal Dutch Order of Oranje Nassau and received her medal from the Dutch Ambassador in Washington, DC. In 1996 the Aruba Tourist Bureau named Ruth and her husband Dr. Stephen Hickman Goodwill Ambassadors. Ruth and her family will be spending Christmas and New Years in Aruba.

Aruba to me – Harold and Denise Troupe