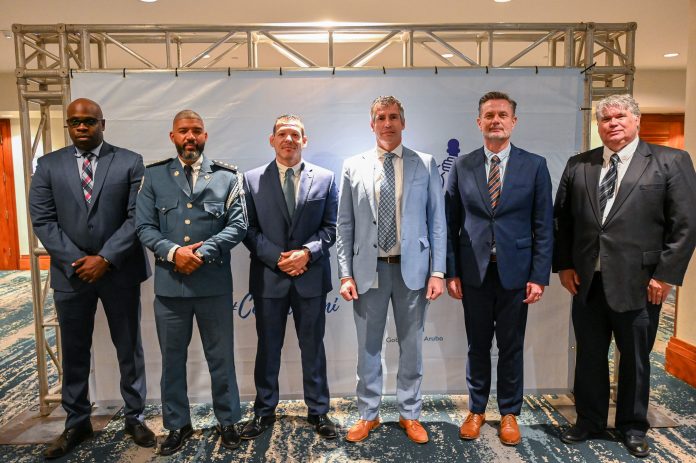 This week, Aruba welcomed delegations from Curaçao, Sint Maarten and the Netherlands for the judicial four-party consultation, in order to create stronger bonds between the ministries of Justice within the Kingdom of the Netherlands, in order to strengthen security at our borders.

There are different projects currently ongoing regarding Justice which received big investments from the Netherlands. For this reason it is very important for the islands to have sufficient capacity to execute these projects. Aside from this, the new book of criminal procedure was discussed, and the contribution of Coast Guard and the Marechaussee were discussed. It is known that in the past few months many interceptions were made – regarding irregularities at sea – and all numbers regarding these interceptions were presented. Here it was concluded that the strategy being executed in the kingdom is giving results. The ministers also discussed points of improvement for the policy plan for 2023.

Organized crime is a topic that often comes forward and is a priority for the Investigative Collaboration Team (RST), but it is also a priority for the Ministry of Justice and Social Affairs of Aruba, according to its policy plan, as was stated in a press release. The approach to organized crime is divided in different aspects, for example, information and intelligence is very important and for this reason, big investments are being made in this area, as well as in the aspect of security at our borders. It is thus an aspect that keeps coming forward, seeing that it has priority from the Netherlands but also from the countries in the Caribbean.

According to minister Tjon, it was a very good meeting between the four countries of the Kingdom of the Netherlands and they expect a lot more cooperation and positive results for the judicial chain.

Recession in the Caribbean

Conferences will change; opportunity for the Caribbean