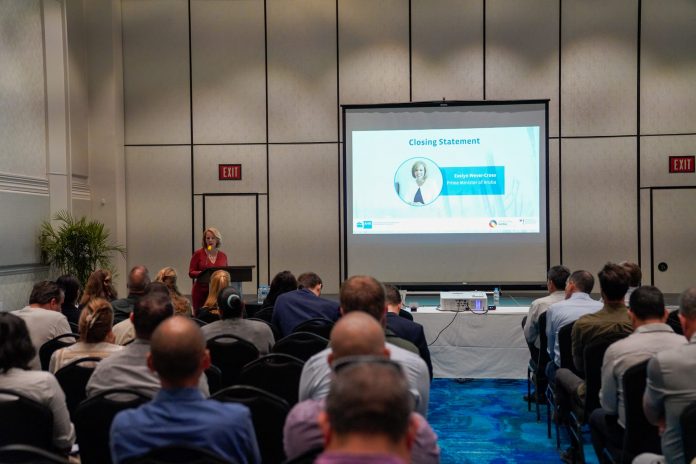 For the fourth consecutive year, Aruba was the host country for the annual conference German-Caribbean Energy Conference” which took place on the 15th of November 2022.

During this conference, prime minister of Aruba, Evelyn Wever-Croes had the oportunity to give a speech extending a warm welcome to those participating, as well as thanking the organizers for choosing the island of Aruba once again to host this conference.

During her speech, the prime minister explained that renewable energy and effcicient energy are very important topics for islands in the Caribbean, including Aruba. Worldwide, these topics are also receiving a lot of attention in the context of climate change. For the Small Island Developing States (SIDS) around the world, climate change is extremely important seeing the damage that it can cause, particularly on islands in the Caribbean that depend on the tourism sector, are vulnerable to climate change – because a hurricane can deplete more than the annual GDP of a country like Aruba. For this reason, the best option is to avoid the negative impact of climate change completely, according to a press release.

The prime minister indicated that Aruba, like other SIDS, recognizes its dependence on fossil fuels, which are known to fluctuate in price constantly, carry uncertainty regarding cost of living and economic development. This resulted in Aruba beginning to walk the path to reduce carbon emissions.

This process began before 2009, when the Government together with Utilities companies came together with a strategic plan with the goal of reducing the use of Heavy Fuel Oil (HFO) and carbon emissions. Regretably, this plan was not realized, however, when there was a change in mandate in the government, stakeholders approached the government and urged it to come with a more realistic plan. According to the press release, the Wever-Croes Cabinet has as a priority to reevaluate the investments done until now and reform the energetic vision for Aruba.

For Aruba it is important that during the energetic transition a focus is given to the human being and to align with the Sustainable Development Goals (SDGs) of the United Nations. For the energy sector this is also important seeing that energy plays an important role regarding cost of living for the citizens of Aruba.

“Aruba is commited to continue working against the effects of climate change. All change begins from the inside, but only if all islands and nations stand together can we win the battle against climate change”, the prime minister expressed in her speech.

To all of you who love Aruba: Let us take you...