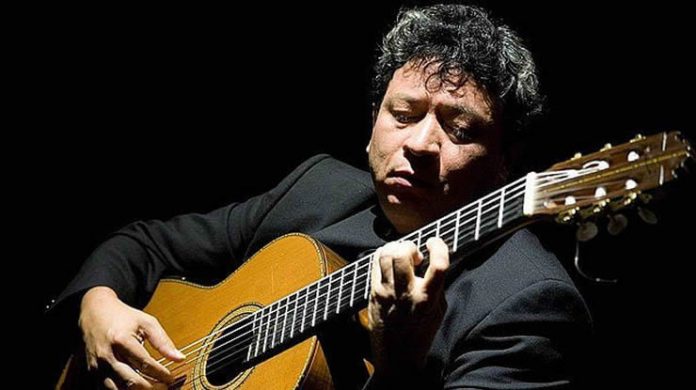 Tim Panting once wrote this in Classical Guitar Magazine of London: “The first thing that impressed me was the obvious force in the fingers of Quintero. His performance was always firm and full of musical contrasts. The passages of velocity were always performed with profound confidence and one could perceive that Quintero felt profoundly what he was interpreting. A performer overflowed with virtuosity”. That is also the impression that Luis Quintero has left on me to this date. And now you can experience this too as Quintero will perform here in Aruba.

A child prodigy, Quintero started his musical education at the “Escuela Superior de Música Jose Angel Lamas” in Caracas, Venezuela. He is the only Latin American who did his post-graduate studies at the Julliard School of Music in New York with a full scholarship from that institute.

Quintero was the winner of the Antonio Lauro Biennial Prize for Professional Interpreters, and of the Rodrigo Riviero Concourse. He has received many awards and recognitions: Order of “José Felix Ribas in the 1st Class”; medal and diploma of the Fundación Venezuela Positiva” and many more.

I met him for the first time in January 2006 when he performed in the Ballroom of the Marriott Hotel Aruba. At that time he was already well known in Aruba as he had given concerts and had conducted workshops here. I had the pleasure of attending many of his concerts the following years in Maracaibo, Venezuela where he used to perform for the Festival Nuevo Mundo.

Playing his beloved guitar in July as part of the 2019 Aruba Symphony Festival he charmed us at Casibari Café, at Paseo Herencia and on board the Freewinds. I now look forward to attend his matinée concert in Cas di Cultura on Sunday, October 20.

The guitar was developed in the 16th century as accompaniment to the Gypsy/Flamenco music in Spain, but in Sunday’s concert at Cas di Cultura Quintero will majestically demonstrate how the guitar has developed into a musical instrument for which many famous composers from all over the world score. His program contains works by the French Armenian Laurent Boutros; the Hungarian János Gáspár Mertz; the Brazilian João Pernambuco; the Venezuelans Ignacio Figueredo and Antonio Lauro; and works of his own. The concert will be at Cas di Cultura in a matinée concert on Sunday October 20 starting at 11am. Tickets are only obtainable before the concert at Cas di Cultura. See you there! q

Motorcycle Tour for Betico Wins in Popularity by Women