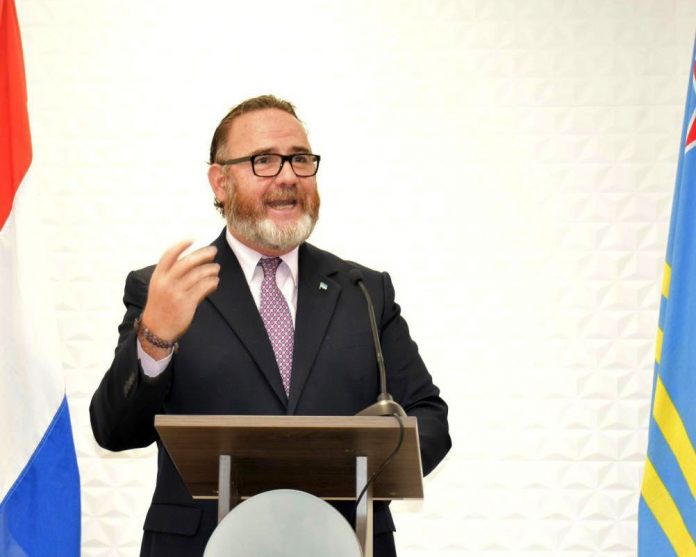 During a recent press conference, minister of Labor, Energy and Integration, Mr. Glenbert Croes informed local media about his recent travel together with a commission to Ecuador to look for the opportunity to purchase heavy fuel oil – the fuel used by WEB Aruba NV to produce water and electricity – at a better price. “I can say that we achieved this goal”, minister Croes said.

Croes mentioned that there was criticism that this fuel from Ecuador is of lesser quality, but he said the reality is that in the past three years, about 50 percent of fuel that WEB Aruba NV purchases from abroad was already coming from Ecuador, and the other 50 percent came from Colombia, Puerto Rico and the United States.

Before this fuel boards a ship, specialist inspectors for HFO imported to Aruba from WEB Aruba NV must approve the HFO. WEB purchases this at the Fuels Marketing and Supply Aruba (FMSA), who are in charge of the purchases.

Seeing as the opportunity to purchase HFO from Ecuador presented itself, a delegation of executives from the Aruba Refinery (RdA) and FMSA in the coming weeks, led by Mr. Edison Briesen as commissary president of RdA will travel to finalize these agreements.

Utilities, Elmar and WEB Aruba NV are investigating if anything went wrong regarding the higher-than-usual bills. “And in any case there is no justification for the high bills that came out, and because of this there needs to be a correction in this before the payment [is due] on the 14th of November, because there needs to be a solution that the people can carry”, he pointed out.

Regarding a better price, minister Croes indicated that they are getting this through the elimination of a middleman, which is very significant. There were two middlemen between FMSA and Petroecuador, and this week they will work on defining the way of connection.

Croes explained that even so, they are not abandoning their efforts in Washington to purchase HFO of Venezuela origin. But in the meantime, the mission in Ecuador produced positive results. He thanked minister of Energy of Ecuador, Xavier Vera Grunauer and his delegation, as well as the general manager of Petroecuador, Hugo Aguiar Lozano together with his delegation for the support in Ecuador. Minister Croes received assistance from the general consul of the Netherlands in Ecuador, Diego Almeida Guzman where he also received support from the Dutch embassy and the plenipotentiary minister of Aruba in Washington, Joselyn Croes.

“The trip to Ecuador produced more results in the context of cooperation between governments which we want to achieve between Aruba and Ecuador. There was also the proposition for a tanker fleet in Ecuador Flopec”, he said. Flopec (Ecuadorian tanker fleet) in the future could use Aruba as a logistic base in this region, which means good news for the storage tanks that Aruba has in RdA as well as great news for the maritime activities in our region, which will also generate income for logistics companies that provide service to ships that dock and carry out operations in our territorial waters, according to Croes.

Petroecuador is the national oil company of Ecuador with capacity for extraction, production, and operation. Croes said in the context of the reactivation of RdA based on natural gas, “as long as there is a possibility for the refinery, that we are in energetic transition, refineries around the world will not stay alive a lot longer but in the meantime you can make use of it”.

Croes announced that Petroecuador has the possibility to make crude oil from Ecuador available for the plans of reactivation that Aruba has for our refinery. “Our refinery will have a life for as long as the world has a possibility for this. But seeing the interest in different projects, like the establishment of hydrogen facilities on the solar refinery, this will be our next step”, he emphasized.