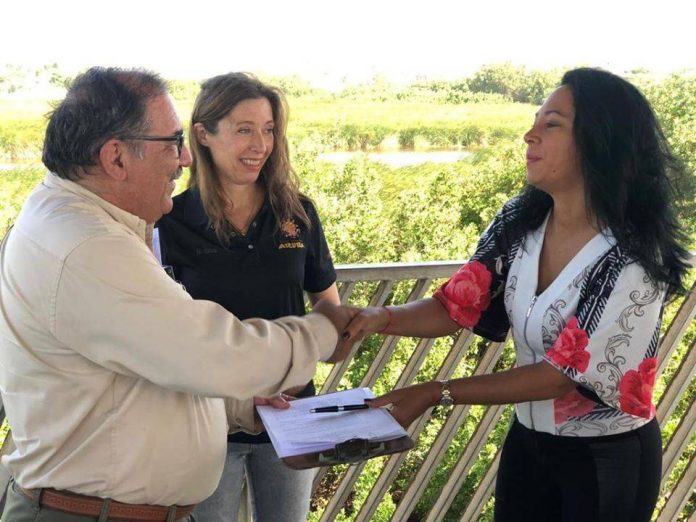 The process towards this decision has been quite a long one, in 2013 the Aruba Birdlife Conservation (ABC) requested official protection of the 16 before mentioned areas. At that time Lopez-Tromp was a parliament member signing in favor of the motion where she could now make this important step official being a minister. The accomplishment means that everyone must behave respectfully at nature preserves on the island.

Over the years, natural / protected areas suffered damage caused by several reasons, among others, the ATV / UTV vehicles. In this past months of the COVID-19 crisis where people were urged to stay inside as much as possible we saw roads without ATV’s, jeeps and cars, empty beaches and less pollution in the air. We could hear the birds sing and see goats crossing roads again. Our national park was closed to visitors since March 23 and nature started flourishing. Plants and flowers arose, animals recovered their space. As the world slowed, Mother Nature was taking a breath and literally dusted off.

Now that Aruba opened up again the discussion about protecting nature is as strong as ever. Roads are filled again with traffic and beaches, especially in the weekend, flood with people. We see empty bottles in the sand and find other disposables in the bushes. Is this the new normal we wonder? Weren’t we determined to do it differently?

The protection of Aruba’s natural areas is only one of the aspects the minister (Lopez-Tromp) is focusing on. The second is the process of vehicle inspection which is carried out by the Department for Technical Inspections (DTI). Remarkable is that Aruba is among the few countries that allow driving of ATV / UTV vehicles on highways. Considering this aspect, the safety of these vehicles (for drivers and general traffic) is a concern, as stated by the minister. DTI is the government department that is in charge of vehicle inspection, including ATV / UTV vehicles. Currently a relatively small group of ATV / UTV has attended and fulfilled a vehicle inspection. The procedure involves: control for valid insurance, control for number plate payment and the overall condition of the vehicle. These factors determine if the vehicle (in this case the ATV/ UTV), will successfully complete the inspection. Aruba Today asked the minister if these inspections are going to be mandatory and if new permit requests for ATV companies will be denied as also permits for extension of the existing ATV companies. We are still pending an answer to those questions from the minister.

In the meanwhile the national park introduced their new policy with regards to ATV’s, UTV’s and SUV’s. They ban ATV’s as of June 1st, restrict the number of UTV’s and SUV’s as of June 1st, and ban UTV’s as of October 31st. A foundation that fights for protection of nature, ABC, says: “It’s time for a moratorium on UTV’s and ATV’s and it is time to regulate off-road tourism. Adventure tourism shouldn’t destroy Aruba’s flora and fauna. Such belongs to the next generation.”

The Aruba Hotel & Tourism Association (Ahata) continues to advocate for regulation of UTV and ATV vehicles on the island, for the sake of safety of the visitors and protection of Aruba’s biodiversity. During a May meeting with the Minister of Justice, the Minister of Spatial Development and Environment, and the Minister of Transport, the CEO of Ahata, Tisa LaSorte, had the opportunity to reiterate the request for regulation sent to the government in January of 2019.  It was agreed by all that regulation is essential.

The newly founded Aruba Off-Road Foundation represents the interest of about 20 Off-road Rental Companies and tour operators. Their wish is to be involved in the decision-making about the off road-vehicles seeing that this is their source of income. They state to understand the need for nature protection, but they have preoccupations about the new regulations within the national park as well as the regulation within the 16 protected nature areas.

Concerns came also from civilian’s initiatives like the Foundation Preserve Malmok. The foundation’s president recently made public an appeal to the government regarding the nuisance and damage of ATV/UTV’s. “I am well aware that there are passionate and powerful economic interests at work in favor of continuing the rental of ATVs and UTVs to tourists. But please know this: Those economic self-interests of ATV/UTV rental and tour companies pale in comparison to the damage these vehicles are causing over the long run to the most important economic interest of our island: the protection and preservation of our “Product Aruba.” Because once tourists stop coming to Aruba because our nature and beaches have been destroyed beyond repair by tourists on rented vehicles Aruba’s future will look dire indeed.” She asks GOA to make it part of our legacy to make change happen to positively impact Aruba’s nature and the public health and safety of our citizens and visitors for generations to come.