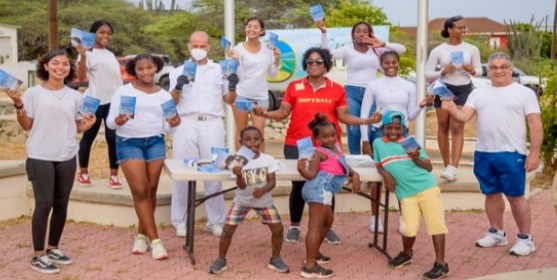 During the Easter weekend the Little League Soft Ball & Aruba Para-Olympic Committee teamed up with the HopEx Foundation and the Freewinds Ship to create a walk that was not only fun but also and example to raise awareness for those with disabilities.

Children as well as adults participated in a combined 5K fun walk and scavenger hunt through the streets of San Nicolas with over 200 participants and 50 volunteers making the event a big success.

What made this event unique and special was that it was not just about who got to the finish line first, but participating in stations along the way where competitors who got to experience what it might be like to live with a handicap. There were also picture moments and games by each station making the scavenger hunt a success. For example, pairing up with another person being blindfolded while their partner assisted them to walk for 100 meters to experience what it is like to be blind. Easter eggs beeped out a signal had to be located by sound rather than sight.

The kids under 10 had a 2K run and after they were back they participated in an adventurous Easter Egg hunt. For the youth there were Beep Eggs they had to locate which made this hunt more difficult. There was something for the adults, for the kids and for the teenagers.

At the end of the race The Way to Happiness, which is booklet with a common sense guide to better living in Papiamento, was given out to participants and people in the crowd by the volunteers of Little League Softball and the Freewinds which was very appreciated.

One of the organizers of the activity, Carmelita Haynes said, “It was a huge success! Participants came to me saying they were very happy to be able to participate today. The Way to Happiness Booklets were eagerly taken with some people saying they had already the booklet and requesting another one.”

Ms Haynes hopes that many more will come out next year. She also wanted to give special thanks to all the sponsors providing prizes and the Freewinds for their continued support to the Aruban community. The sponsors who donated to the Paralympic committee and Little League Softball were: SETAR, Super Food, KIWANIS San Nicolas,Berg’s Ice, Keke Super Center, The Volunteers from Colegio San Nicolas and all those persons who participated to make this FUNWALK a great success.

For more information about The Way to Happiness visit the www.waytohappiness.org website

A peek into Aruba’s past and how it has shaped the...

Hilton’s newest Aruba-Orientated massage: Wander Off in a World of Relaxation