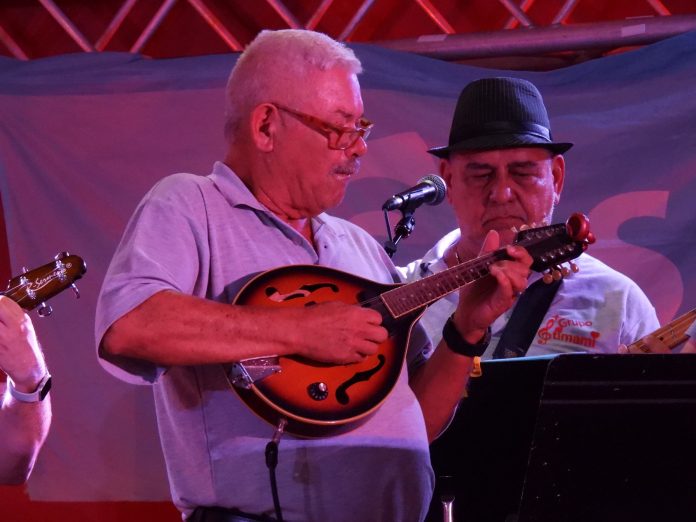 After 7pm at Club Caquetio in Paradera, the year-end folklore and tradition resonated under the organization of Harry Croes, commemorating 50 years of this tradition, giving Aruba the opportunity to celebrate the culture of our island with a Dande Festival.

Dande
The most traditional cultural intangible heritage Aruba has throughout the Christmas season is called Dande. The Dande is a local oral tradition where the song “ay nobe” (aña nobo) – “new year” is performed as the New Year is approaching or has arrived. Dande stems from the word Dandalia, which loosely translates into “to party, he who parties, or simply paranda”. The first sentence of the Dande song “oh dande nos a jega na bo porta” – Ay Nobe, translated means “Oh the party has arrived at your door” – New Year. The origin of the Dande is not known, however there are many theories such as; 1. Its starting in the district of Savaneta, 2. Its starting in the district of Noord, 3. Its popularity strengthened in the district of St. Cruz, or 4. Its starting after the abolition of slavery in 1863 by the Dutch King.

A group of five or sometimes even six people (one singer accompanied by numerous musicians) usually performs the most known Aruban end of the year tradition. These people, usually family members accompany a singer and travel door-to-door to express their best wishes for the New Year in repetitive phrases (blessings), with a chorus that includes the phrase “ay nobe” (aña nobo) – “new year” – sung after each blessing. Currently, the celebratory travel usually leads to the houses of the singers’ friends and family, where the singer collects money in his hat to give to the group. Traditionally the removal of the singer’s hat is considered a sign of respect he/she is expressing to the family and person they are singing to and blessing. Instead of money, back in the day, the singer would receive food (for example pan dushi “sweet bread”) in their hat as a token of gratitude for their long trip. The singer starts by blessing the head of the house and then one by one passes to every person present. Besides visiting local houses on New Year’s Eve and the day after, the Dande tradition is very popular on the last working day of the year. Local businesses invite a Dande group to come and bless their workers and the company as the New Year approaches.

Winners
In the adult category, the winners for 2022 are:

Congratulations to all participants in the Dande Festival 2022, in the adult as well as children and youth categories, who showed their best and their talents on stage to keep Aruba’s culture and tradition alive during the year-end celebrations.

Images from the Department of Culture of Aruba.

Get Down for some exciting Soccer

We honor our Goodwill Ambassadors