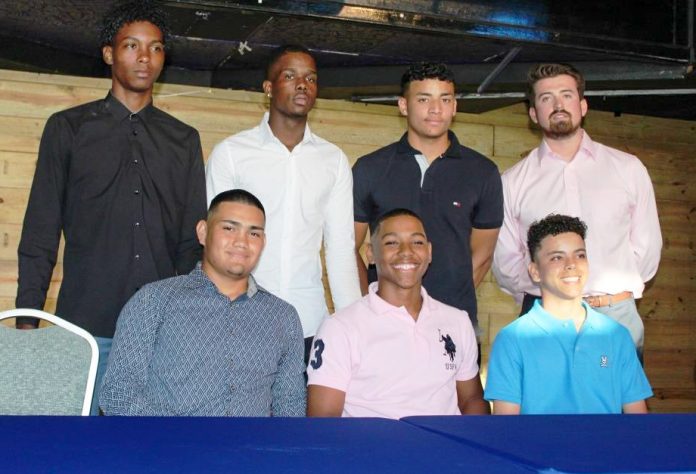 297 Baseball Academy was started in 2019 with the goal of developing and training local baseball players to help get them recruited to colleges in the United States.

The international recruiting process can be very challenging and overwhelming. 297 Baseball Academy works with both the players and their families to find the “best fit” both athletically and academically. Over the past two years, the academy has helped ten players realize their dream of playing college baseball and helped one player get recruited to a private collegiate preparatory high school.

297 Baseball Academy is currently running a College Summer Prospect League which allows college coaches and scouts to watch live streamed games. Many of the players recruitment success was due to their participation in last summers league as well as owner, Brodie Carey’s history as Division One Baseball and his connection to colleges coaches and MLB scouts. The current league runs from July 6th to July 29th.

From August 1st to 8th, 297 Baseball Academy will be hosting 106 baseball players and their families from Westbrook, Maine. The 297 Baseball Experience allows teams from the United States to visit Aruba and play local talent, while experiencing the culture of island. The SuperNova team will be playing several local teams at Joe Laveist Stadium and participating in a community service event.

On July 10th, 297 Baseball Academy hosted their annual Collegiate Signing Night at 5:00 pm at the Paseo Herencia Ballroom. Six local student athletes signed their College Letter of Intent to attend school and play baseball in the United States. The players will be attending schools in Maine, Massachusetts, New Hampshire, New York and Virginia. The following student athletes are:

Brandon Vero Hoftijzer
Cayuga Community College. A NJCAA a two-year community college in Auburn, New York. A member of the Midstate Atlantic Conference. Brandon home field is the Falcon Park a minor league baseball stadium. Their mascot is the Spartans.

Dyrenson Wouters
Southern New Hampshire University, Penway-Manchester, New Hampshire. A NCAA Division II, four-year university. A member of the Eastern College Athletic Conference and the Northeast-10 Conference. There have been 12 MLB draft picks from the school with one making it to the major leagues. There mascot is the Penmen.

ShammyThayne Maximiliana
University of Lynchburg in Virginia. NCAA Division III. They are a member of the Old Dominion Athletic Conference. There have been 17 players drafter to the MLB and two Major Leaguers. Their mascot is the Hornets.