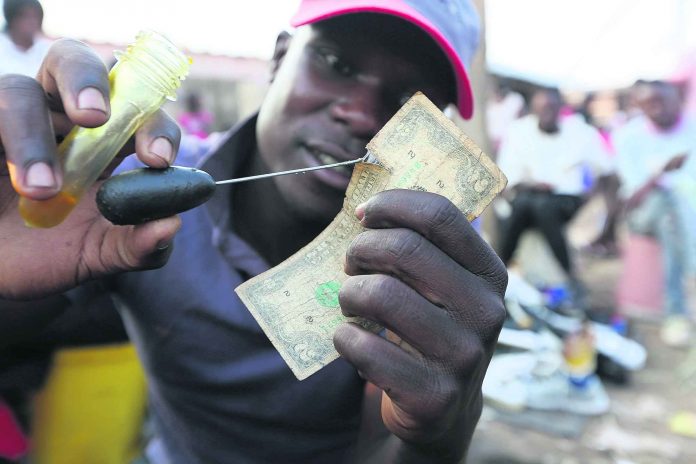 Albert Marombe takes a grimy, tattered $1 note and delicately, expertly glues it back into one piece, holding it up for inspection.

“I don’t care how torn it is. All I want to see is the serial number being visible on both sides,” said Marombe. He’ll sell that shabby $1 note for 80 cents and it will get back into circulation. Many shops will reject it but market traders will take it, although at a reduced value.

Worn out or shredded by rats, $1 notes are king in Zimbabwe, beset by a continuing economic crisis. One dollar bills are used by many people to buy their daily bread and other small purchases. Crisp new notes are not coming into Zimbabwe, so enterprising traders are repairing old ones for desperate customers.

Formal businesses reject such notes, forcing people to sell them to traders like Marombe for a fraction of their original value. Informal street markets will usually – with some negotiation – accept the glue-patched notes that Marombe sells for transactions. Zimbabwe’s booming informal economy employs about two-thirds of the population, according to the International Monetary Fund, so there are lots of such dirty dollars in circulation.

The U.S dollar has dominated transactions in Zimbabwe since the country’s hyperinflation soared to more than 5 billion percent and forced the government to abandon the local currency in 2009.

Last year the government re-introduced a Zimbabwe currency and banned foreign currencies for local transactions. Few took heed though and the black market thrived, while the local currency quickly devalued. In March this year, the government relented and unbanned the dollar. Now shortages of small denominations of the dollar are a nightmare.

The once-prosperous southern African country’s economy is so weak from de-industrialization, low investment, low exports and high debt that it does not generate an adequate inflow of fresh greenbacks needed for its largely dollarized local economy, Harare-based economist John Robertson said.

“If people do have a small denomination in U.S. dollars they don’t want to put those in the bank. They want to keep it to themselves,” said Robertson, explaining that banks generally do not pay account holders in cash.

Larger denominations are too big for many purchases. Traders such as Marombe fill the gap by patching up torn dollar bills of many denominations, but the $1 note is their main business.

“I am here by 6 a.m. daily and leave late … business is good. I am surviving,” said Marombe, popularly called “the money sanitizer” by other market traders.

He said he buys the $1 notes for between 40 cents and 60 cents each, depending on their condition, and sells them at a profit.

Marombe, 38, sold second-hand clothes until six months ago when he saw the opportunity to make money by patching up old dollar bills and selling them at a profit. He’s making enough to support his pregnant wife and two children, including one who is a teenager and writing final year secondary examinations this year.

In cities across the country, currency traders line the streets holding wads of both local currency and U.S dollars. The $1 notes that are in good condition go for a 10% premium. Traders said they buy the better-looking notes from retail shop owners and workers and from street vendors who hoard $1 notes paid by purchasers of small items.

The street traders also take larger bills and provide the equivalent amount in smaller denominations for a 10% fee.

The government says the practice is illegal and the police sometimes raid the currency traders, seizing their precious dollar notes and issuing fines.

But there aren’t many choices for shoppers. If they buy goods at a supermarket that cannot provide change for their purchase, they are given paper coupons to be used at the same supermarket at a later date.

“At times they run out of these coupons so I am forced to take candy,” said Innocent Chirume, outside a supermarket in Harare. “It is very inconveniencing. I can’t take a bus into town using a coupon,” he said.

Banks are encouraging electronic payments for transactions to resolve the problem of small change “given that U.S dollars are not produced in Zimbabwe and are imported at high cost,” Bankers Association of Zimbabwe president Ralph Watungwa said.

Bank customers can exchange soiled notes for “usable” ones, although “the process of exporting the soiled notes and importing fresh ones is a long and costly process” for banks, he said.

The shortage of dollar notes and people’s lack of trust in banks means that many stash their cash at home. This is a boon to currency traders like Marombe.

“One customer came with $100 dollar notes worth $1,000. He was saving for a car but the rats got to the money first,” chuckled Marombe, who said he charged to repair the gnawed notes. “It was a big payday for me!”