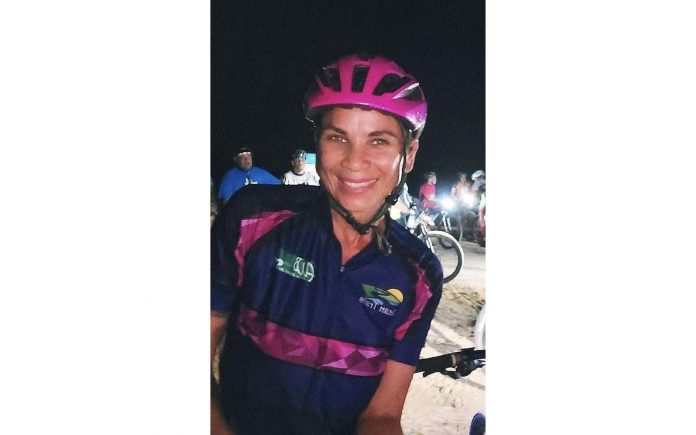 Teacher, wife and mother – but in the sports community, particularly cycling, Zetsia Piña is known as an exceptional athlete, a mountainbiker like no other in Aruba, and now she’s the motor behind Mimosas, a group of women who practice recreational mountain biking.

Zetsia grew up in the world of sport. Her parents signed her and her siblings up, from a young age to various sports activities. Her mother, also a teacher, and her father, a musician and swimming instructor, were determined to have their children be active in sport.

“We were never at home. There was always something to do, every time there was a project. And my sister and I were always active from one project to the next.” And this way she decided to create the group Mimosas, which is a group of women from every athletic level and age, to simply mountain bike together. “My father, my husband and mi children support me.”

It was her father who bought her first bicycle to ride on the street back when Zetsia was nine years old. It was her husband, who started riding mountain bikes fifteen years ago, who gifted her with a mountain bike. Afterwards it was Zaida Everon, who has won many cycling competitions in Aruba, who invited Zetsia to ride with her. And so the passion to get lost in the mondi – Aruba’s wilderness – in search for adventure was born. “I didn’t know that I would like mountainbiking so much”, Zetsia told our reporter. “It gave me inspiration to do something for other women.”

Everon didn’t continue with mountain biking, but Zetsia felt the need to pay it forwards, thus to make sure that just like Zaida was an inspiration for her, she could also inspire other women to get on a mountainbike and ride into a different world.

Piña decided to participate in competitions in Aruba and also abroad. She was a person who became legendary among cyclists, because she would win most of the races. “I was always competitive, since a young age”, she said. And for many years, it was Zetsia and maybe two or three female runners who dominated the area of cycling in Aruba, particularly mountain biking.

But after ten years, she felt it had been enough and she really didn’t want to be in races by herself anymore. She decided to change her focus.

Mimosas
It was during the pandemic that she realized that people do spend a lot of time alone. She would also ride alone most of the time, and she felt the need to organize something for other women who also ride alone. “You cannot image the joy in my heart when I saw so many women riding bikes together – without judging each other, without measuring each other – just people coming together to do something positive. The union of the female riders is so beautiful. I love it!”

The group became so big that it’s now divided in some days. For example, those who are just starting gather on Monday. But to help everyone, Zetsia decided to start giving training also, and this is on Tuesdays. “And on the day of training, everyone is more than welcome. What I’m searching for is a circuit that in the end everyone meets everyone, so that each person rides and trains according to their level.”

The men’s club who ride around on their mountainbike always cap off their rides with beer. And Zetsia, thinking about what could be the drink that women really appreciate came up with the name Mimosa, the mix of champagne and orange juice. “After a ride, we were looking for something to drink and so it became Mimosa. After a few rides we would always go find mimosas to drink, but by now it’s already a rule, that we prepare the rides to finish up with a mimosa. And so the name stuck.”

Active in mountainbiking
What mountainbiking does is inspire, because you must go in the mondi. It’s an activity that requires a lot of physical effort that a person wants to give. Even though it’s not always easy, it’s an opportunity to find mental peach and enjoy nature at the same time, aside from the physical activity. “There are times when I ride on the road also, those times I go alone. It’s a way to relieve stress. For me, the way to relieve stress is for me to ride my bike alone. This is my way to be alone for a while. It’s nice.”

Cyclists are also part of traffic

On top of it, a bicycle is accessible for everyone, it’s relatively easy. “The only problem that we have is the traffic. Motorists still don’t cooperate.” Piña cannot understand why people don’t realize that there are more and more cyclists on the road, and they also have a right to use the infrastructure. “From primary school everyone knows that cyclists are part of traffic, but they don’t always act like it, and I find it regrettable.”

Consequently, riding mountainbike in the mondi is still safer, because the areas with many cars can be avoided. “I ride my road bike, but I must admit that sometimes it’s scary, so I prefer my mountain bike.”

Sportspeople sacrifice their free time in order to win. But what’s elemental is to appreciate the training, and even during competition, feel like it’s a pleasure ride, to enjoy the moment. It was this mentality that helps anyone be a lot more successful in their training, competition and finally daily life. Because bike riding doesn’t become another chore then, rather a moment to leave routine as a primary school teacher, wife, and mother behind. “Train hard so that when you run a race, it’s like a pleasure ride. But really, my time to relax is riding a bike.”

According to Zetsia, what’s also beautiful is that the world of cycling in Aruba is like a family. They’re all open with each other and help each other, and this is obvious when they compete together abroad. “They are my family. You have people of all ages – parents sing their kids up in the sport and they run with everyone. We raise kids with the perspective that they can always ride their bikes.”

Finally, Zetsia Piña advices everyone who wants to start riding a bike to make sure to find one that fits their size, and to adjust the seat to the height that matches the body, to avoid problems later. “And train a lot. Train at least 15km each time, and plan your races, and be consistent to keep using the bike. This way you avoid that in the long run the bike becomes just something from which to hang clothes”, she commented.

Honoring of a loyal visitor at Costa Linda Beach Resort