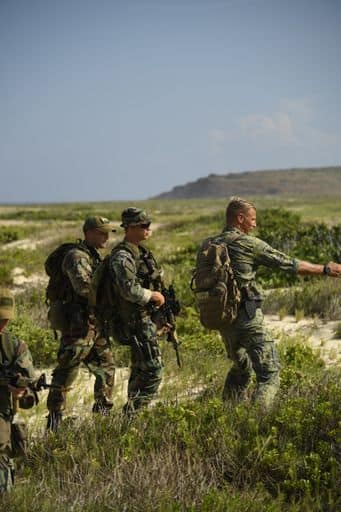 The Netherlands Marine Corps will be hosting their American colleagues for the next four weeks here in Aruba. The Dutch marines also just finished a three weeks Military Tracker Training.

November 7 the American colleagues, the US Marines, arrived in Aruba. Our island will be the stage for various training sessions for the next four weeks. The marina barracks in Savaneta, MSKSAV, is facilitating our guests in the coming period. The training sessions are often together with our own marines from 32 Raiding Squadron. Knowledge and skills are being exchanged so that cooperation between themselves continues to go well, this is essential during ‘ combined missions.

Friday was the last day of the Military Tracker Training in Aruba. No less than 33 future trackers followed the 3-week course they completed this week with a so-called ‘Final Exercise’. Tracking is the ability of locating, identifying, interpreting and chasing tracks. Trackers are deployed, among other things, for ′′ search and rescue tasks “, to support local authorities. But they are also deployed in enemy territory in operations around the world. The training consists of a technical and theoretical part, practical skills of the individual man, and team performance. The certificate presentation took place today. Congratulations!

Defense on Aruba is the responsibility of the Kingdom of the Netherlands. The Netherlands Military forces that protect Aruba include the Royal Netherlands Navy, the Netherlands Marine Corps and the Netherlands Coastguard. There is also a small indigenous “ArubaanseMilitie” (ARUMIL) of about platoon strength. All forces are stationed at Marines Barracks Savaneta.