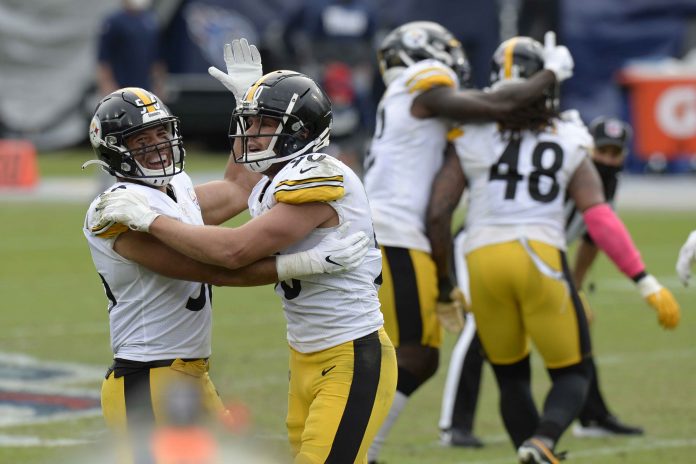 As the league’s only unbeaten team, the Pittsburgh Steelers have climbed all the way to the top of the NFL. As well as the No. 1 spot in the latest AP Pro32 poll. But just barely.

The Steelers received seven of the 12 first-place votes for 378 points in balloting Tuesday by media members who regularly cover the NFL.

The Steelers held off the Tennessee Titans 27-24 on Sunday in a matchup of 5-0 teams when Stephen Gostkowski missed a 45-yard field goal with 14 seconds left. The loss dropped the Titans three spots to No. 7.

The Steelers improved to 6-0 for their best start since 1978, when Pittsburgh won its first seven on the way to the Super Bowl.

“The Steelers are the only undefeated team, making them No. 1 in this week’s poll,” said Charean Williams of Pro Football Talk. “The margin, though, is small among the top five or six teams.”

The Kansas City Chiefs remained No. 2 after getting four first-place votes and 376 points. The Chiefs routed the Broncos 43-16 on Sunday and will welcome the league’s only winless team, the New York Jets, to Arrowhead Stadium this week.

The Baltimore Ravens, who were on a bye last week, got the remaining first-place vote and climbed two spots to No. 3. The Ravens host the Steelers this week in the top matchup of Week 8.

And the Seattle Seahawks dropped three places to No. 4 after losing to the Arizona Cardinals in overtime on Sunday night for their first loss of the season.

“The Seahawks yet again played a chaotic thriller, but this time they couldn’t come up with a defensive stop to close out the game,” said Jenny Vrentas of The Monday Morning Quarterback. “They have three more NFC West games in the next month to help sort out the most competitive division in the NFL.”

The “Bays” each gained a spot. Green Bay moved up to No. 5 after routing the Houston Texans and Tampa Bay is now No. 6 after dominating the Raiders in Las Vegas. The Buccaneers will close Week 8 when they head to the Meadowlands to face the New York Giants on Monday night.

“After an uneven start in which he had three touchdowns and three interceptions, Tom Brady has entered the MVP conversation with 15 TDs and just one pick in his last five,” Newsday’s Bob Glauber said. “And it’s not just Brady doing the heavy lifting. (Coordinator) Todd Bowles’ defense has emerged as one of the league’s most impactful.”

The New Orleans Saints gained two spots to No. 8 after edging the Carolina Panthers on Sunday.

The Buffalo Bills remained at No. 9 and will host the slumping New England Patriots this week for a chance to solidify their hold on the AFC East. The Patriots fell a spot to No. 18.

“We can’t be certain if this post-(Tom) Brady collapse would have occurred in a non-COVID season,” said Alex Marvez of Sirius XM.

“We also know the Patriots have forced skeptics to eat their words by rebounding from other rough situations. That’s why I’m not ready to bury New England just yet — unless Buffalo does that on the field Sunday.”

And the Los Angeles Rams moved up a spot to No. 10 after handling the Chicago Bears on Monday night.