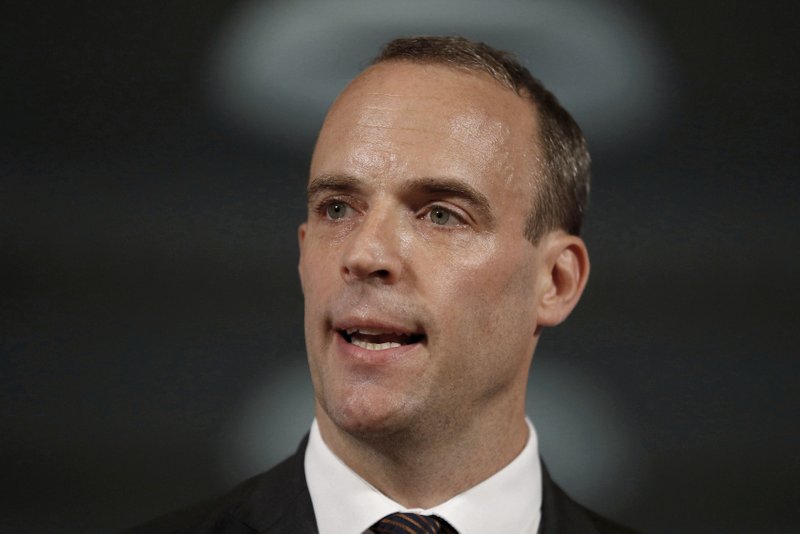 LONDON (AP) — Businesses could face red tape at the border, customers could see higher credit card fees, patients could endure delays to medical treatment and there could even be a sperm shortage if Britain leaves the European Union next year without a deal, the U.K. government acknowledged Thursday. But Prime Minister Theresa May’s Conservative government vowed it would limit the instability that could be triggered by a disorderly Brexit, releasing documents outlining its plans to cope.

Even if Britain crashes out of the bloc next year without a trade deal, its plans include unilaterally accepting some EU rules and giving EU financial services firms continued access to the U.K. market. Brexit Secretary Dominic Raab said Britain was determined to “manage the risks and embrace the opportunities” of Brexit. “We have made clear that if negotiations don’t achieve the optimum outcome, we will continue to be a responsible European neighbor and partner,” he said in a speech Thursday to business leaders in London.

With seven months until Britain leaves the EU on March 29, negotiations on divorce terms and future trade have bogged down amid infighting within May’s divided government about how close an economic relationship to seek with the EU. The government insists it’s confident of getting a deal, but is preparing for all outcomes. On Thursday it published the first 25 of more than 70 papers covering “no-deal” planning for sectors including financial services, medicines and nuclear materials. The rest are to be released by the end of September. The documents urge people and businesses not to be alarmed, and say the government will work to “minimize any disruption to the economy.”

The papers say Britain will allow EU financial services firms continued “passporting” rights to operate in the U.K. for up to three years, even if no agreement is reached with the EU — although it can’t guarantee that the bloc will let U.K. companies operate there. That could leave British retirees living in EU countries unable to receive their pensions. Raab said Britain would take “unilateral action to maintain as much continuity as possible” and insisted that “for the vast majority of consumers in this country, there’s not going to be much change at all.” He dismissed alarming headlines suggesting the U.K. could run out of sandwich supplies and other staples because of economic barriers between Britain and the EU, its biggest trading partner.

“You will still be able to enjoy a BLT after Brexit,” Raab said. But the documents reveal the possible scale of disruption to the British economy and daily life that could follow Brexit.
Britain will need new regulatory bodies to carry out functions currently done by the EU, and British businesses that now trade freely with the bloc will face new paperwork if there is no deal. For goods going to and coming in from the EU, “an import declaration will be required, customs checks may be arrived out and any customs duties must be paid,” one document says. And one of the thorniest questions — how to maintain an open border, free of customs posts, between EU member Ireland and the U.K.’s Northern Ireland — remains unanswered.

“We will provide more information in due course,” is all the documents say. The government said the U.K. will recognize EU standards for testing medicines, so drugs from the bloc won’t need to be re-tested in the U.K. But new drugs and treatments would still need approval from the U.K. medicines regulator before they could be sold in Britain. Steve Bates, chief executive of the U.K. Bioindustry Association, said that meant British patients “would get access to new therapies later than other countries in Europe.” Brexit could also affect the supply of semen for fertility treatment, the papers say. Almost half of Britain’s donor sperm currently comes from EU member Denmark.

If there’s no deal, Britain will be outside the EU’s directive on organs, tissues and cells, and U.K. fertility clinics will need to strike new written agreements with their suppliers. The papers reveal that British organic farmers won’t be able to export their produce to the EU unless the bloc certifies U.K. standards — a process that can’t start until after Brexit and takes nine months. And the widely recognized organic logo plastered across everything from vegetables to beef belongs to the EU, so U.K. producers will no longer be able to use it.
Cigarette packaging also will have to be redesigned, because the EU holds the copyright on the photos of diseased lungs and other off-putting images emblazoned on the packs.

And millions of Britons could find online shopping more expensive. The documents note that in the event of no deal “the cost of card payments between the U.K. and the EU will likely increase” and the EU-imposed ban on firms charging extra for credit-card payments will no longer apply. Keir Starmer, Brexit spokesman for the opposition Labour Party, said the government’s “vague papers” wouldn’t reassure anybody. European Commission spokesman Alexander Winterstein said the bloc was “working constructively to reach a deal.” But, he said, “it is also clear that the withdrawal of the U.K. is going to lead to disruption, regardless, with a deal or without a deal.” “That’s why everybody, and in particularly economic operators, need to be prepared,” he added.

EU calls for calm, warns US-Iran of conflict ‘by accident’