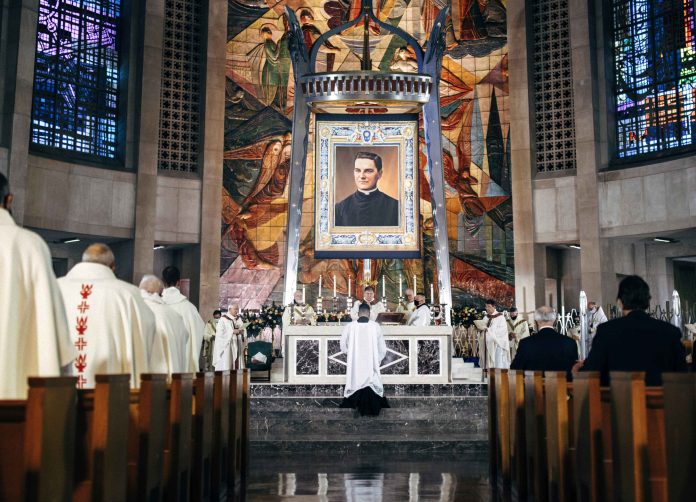 The late Connecticut priest who founded the Knights of Columbus moved a step closer to possible sainthood with his beatification Saturday, as authorized by Pope Francis.

The celebration for the Rev. Michael McGivney at the Cathedral of St. Joseph in Hartford included the reading of a letter from Francis and the unveiling of a tapestry featuring McGivney’s portrait.

Francis in May approved a miracle attributed to the intercession of McGivney, which is required to be beatified, the first major step before canonization.

The Knights of Columbus said the miracle concerned the medically inexplicable cure of a baby with a life-threatening condition who was healed in utero in 2015 after the family prayed to the Roman Catholic priest.

“I thought about bringing a relic back to our house, but ever since Michael has been born we’ve felt like he was our own little relic,” his father, Daniel Schachle, said. The family lives in Dickson, Tennessee.

McGivney died at age 38 of pneumonia in 1890, eight years after founding the Knights with a small group of parishioners while he was an assistant pastor at Saint Mary’s Church in New Haven.

His tomb is in the rear of St. Mary’s.

Today the lay charitable organization is one of the biggest Catholic organizations in the world, with about 2 million members in the Americas, Caribbean, Asia and Europe.

Francis, in his letter, praised McGivney for his “zeal for the proclamation of the Gospel and generous concern for his brothers and sisters.”

McGivney was ordained a priest of the Archdiocese of Hartford in 1877.