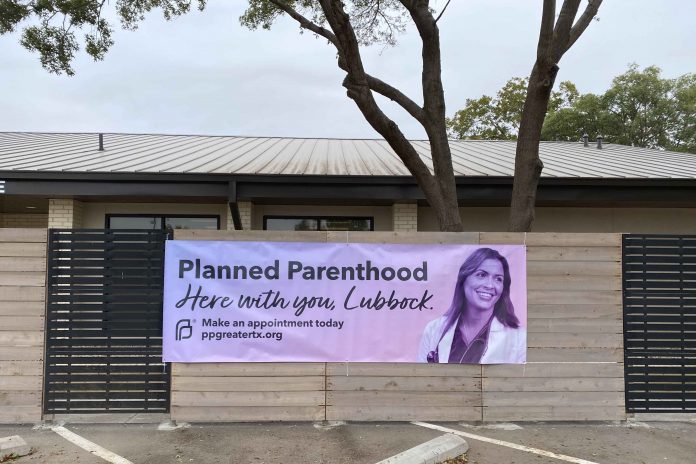 A vast swath of West Texas has been without an abortion clinic for more than six years. Planned Parenthood plans to change that with a health center it opened recently in Lubbock.

It’s a vivid example of how abortion-rights groups are striving to preserve nationwide access to the procedure even as a reconfigured Supreme Court — with the addition of conservative Justice Amy Coney Barrett — may be open to new restrictions.

Planned Parenthood has made recent moves to serve more women in Missouri and Kentucky, and other groups are preparing to help women in other Republican-controlled states access abortion if bans are imposed.

“Abortion access in these states now faces its gravest ever threat,” said Alexis McGill Johnson, Planned Parenthood’s president. She said the new health center in Lubbock “is an example of our commitment to our patients to meet them where they are.”

The clinic opened on Oct. 23 in a one-story building that had been a medical office and was renovated after Planned Parenthood purchased it. To avoid protests and boycotts that have beset some previous expansion efforts, Planned Parenthood kept details, including the clinic’s location, secret until the opening was announced.

Planned Parenthood says the health center will start providing abortions — via surgery and medication — sometime next year. Meanwhile, it is offering other services, including cancer screenings, birth control and testing for sexually transmitted infections.

Planned Parenthood closed its previous clinic in Lubbock, a city of 255,000 people, in 2013 after the Texas Legislature slashed funding for family planning services and imposed tough restrictions on abortion clinics.

That law led to the closure of more than half the state’s 41 abortion clinics before the Supreme Court struck down key provisions in 2016. There were no clinics left providing abortion in a region of more than 1 million people stretching from Amarillo in the Texas Panhandle south to Lubbock and the oil patch cities of Odessa and Midland.

Women in Lubbock faced a 310-mile (500-kilometer) drive to the nearest abortion clinic in Fort Worth.

Anti-abortion activists have been mobilizing to prevent the return of abortion services to Lubbock — and are not giving up even with the new clinic’s opening.

“Lubbock must not surrender to the abortion industry,” said Kimberlyn Schwartz, a West Texas native who attended Texas Tech University in Lubbock and is now communications director for Texas Right to Life.

Her organization has backed a petition drive trying to persuade the City Council to pass an ordinance declaring Lubbock a “sanctuary city for the unborn.” Abortion opponents hope that designation would lead to either enforcement efforts or lawsuits seeking to block abortion services.

Thus far, the City Council has declined to adopt the ordinance, but activists say they have enough signatures to place it on the ballot in a local referendum.

Texas is one of several red states where Planned Parenthood has sought to expand abortion access. Earlier this year, its health center in Louisville, Kentucky, began providing abortions after obtaining a license from the newly installed administration of Democratic Gov. Andy Beshear.

For the previous four years, anti-abortion Republican Gov. Matt Bevin’s administration refused to issue a license. The change doubled the number of abortion providers in Kentucky from one to two.

Dr. Kara Cadwallader, Planned Parenthood’s chief medical officer for Kentucky and Indiana, said the resumption of abortion services in Louisville had gone smoothly. Anti-abortion protesters routinely appear outside the building, she said, but they were a steady presence even when the center did not provide abortions.

She and her colleagues are bracing for a new wave of anti-abortion legislation from Kentucky’s Legislature, where the GOP holds enough seats to override possible vetoes from Beshear.

“We’ll once again be under siege,” Cadwallader said.

In October 2019, Planned Parenthood’s affiliate in St. Louis opened a large new health center in Fairview Heights, Illinois — about 17 miles (27 kilometers) from its St. Louis clinic. Illinois, where Democrats hold power, has not sought to curtail abortion, and the clinic was intended to provide an extra option for women from Missouri and other nearby Republican-governed states with multiple restrictions.

Missouri, for example, bars the use of telemedicine for abortion services, a policy that has sharply limited the number of medication abortions. Dr. Colleen McNicholas, Planned Parenthood’s chief medical officer for reproductive health services in the St. Louis region, has made clear that medication abortion by telemedicine is available in Illinois.

The Rev. Katherine Ragsdale, who represents many independent abortion providers as president of the National Abortion Federation, said one priority for her members is to make medication abortion more widely available. She also anticipates that it will become more difficult for women to obtain late-term abortions, increasing the need for funding programs that can help pay for travel to clinics that offer those procedures.

Laurie Bertram Roberts is executive director of one such program, the Alabama-based Yellowhammer Fund. She anticipates an increase in the number of low- and middle-income women who will need significant financial help — sometimes topping $10,000 — to travel to distant clinics if access is curtailed in Alabama.

“We’re talking about a huge amount of people who can possibly do stuff at home safely,” she said. “We’re not going back to the days of back-alley abortions.”

Trump picks Mick Mulvaney to be next chief of staff