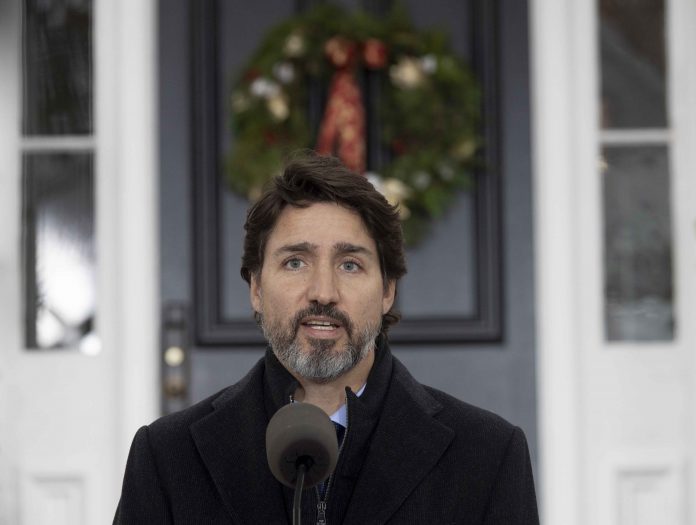 Prime Minister Justin Trudeau said Tuesday Canada will have to wait for a vaccine because the very first ones that roll off assembly lines are likely to be given to citizens of the country they are made in.

Trudeau said the United States, the United Kingdom and Germany have mass vaccine-production facilities but Canada does not.

Trudeau said it is understandable that an American pharmaceutical company will distribute first in the U.S. before they distribute internationally.

“Shortly afterwards they will start honoring and delivering the contracts that they signed with other countries including Canada,” Trudeau said. “We’re expecting to start receiving those doses in the first few months of 2021.”

Trudeau said Canadians won’t have to wait for everyone in the U.S. to be vaccinated before Canada gets doses.

Trudeau said having pre-bought an array of vaccine candidates from foreign manufacturers will help get Canadians effective doses as soon as possible. He noted Canada pre-bought millions of doses from a number of pharmaceutical companies.

“Since the very beginning we knew there would be challenges because unlike the Germans, Americans and the British we don’t have a mass production capacity for vaccines so we had to come up with broader sources than those sources and that’s precisely what we did and we were even criticized internationally because we got too much access to vaccines,” Trudeau said.

The issue of access to vaccines was discussed at the G-20 this past weekend and Trudeau said he’s working with allies to make sure there is a free flow of contracts. He said countries recognize that “no one place gets through COVID-19 until all places are through COVID-19.”

UK police: Park stabbing that killed 3 was a terror attack