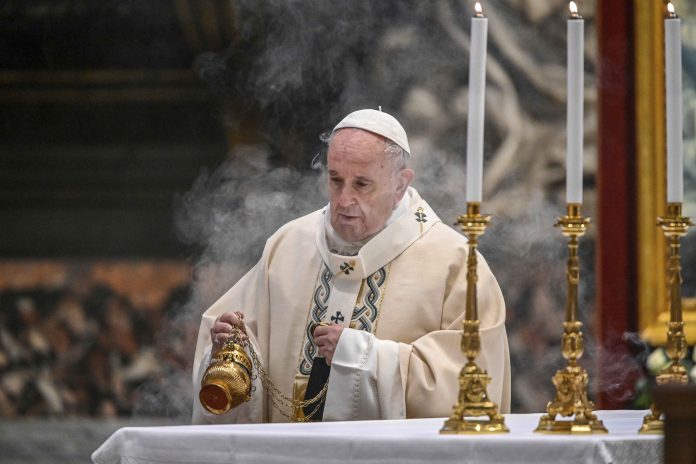 China criticized Pope Francis on Tuesday over a passage in his new book in which he mentions suffering by China’s Uighur Muslim minority group.

“People of all ethnic groups enjoy the full rights of survival, development, and freedom of religious belief,” Zhao said at a daily briefing.

Zhao made no mention of the camps in which more than 1 million Uighurs and members of other Chinese Muslim minority groups have been held. The U.S. and other governments, along with human rights groups, say the prison-like facilities are intended to divide Muslims from their religious and cultural heritage, forcing them to declare loyalty to China’s ruling Communist Party and its leader, Xi Jinping.

China, which initially denied the existence of the facilities, now says they are centers intended to provide job training and prevent terrorism and religious extremism on a voluntary basis.

In his new book “Let Us Dream,” due Dec. 1, Francis listed the “poor Uighurs” among examples of groups persecuted for their faith.

Francis wrote about the need to see the world from the peripheries and the margins of society, “to places of sin and misery, of exclusion and suffering, of illness and solitude.”

In such places of suffering, “I think often of persecuted peoples: the Rohingya, the poor Uighurs, the Yazidi — what ISIS did to them was truly cruel — or Christians in Egypt and Pakistan killed by bombs that went off while they prayed in church,” Francis wrote.

Francis has declined to call out China for its crackdown on religious minorities, including Catholics, much to the dismay of the Trump administration and human rights groups. The Vatican last month renewed its controversial agreement with Beijing on nominating Catholic bishops, and Francis has been careful to not say or do anything to offend the Chinese government on the subject.

On Tuesday the Vatican confirmed that Qingdao Bishop Thomas Chen Tianhao had been recently consecrated bishop with papal consent as a result of the 2018 deal, the third such ordination. In a statement, the Vatican spokesman Matteo Bruni said the Holy See expected more bishops to be named as a result of the deal “because several procedures are under way for new episcopal nominations.”

China and the Vatican have had no formal relations since the Communist Party cut ties and arrested Catholic clerics soon after seizing power in 1949.