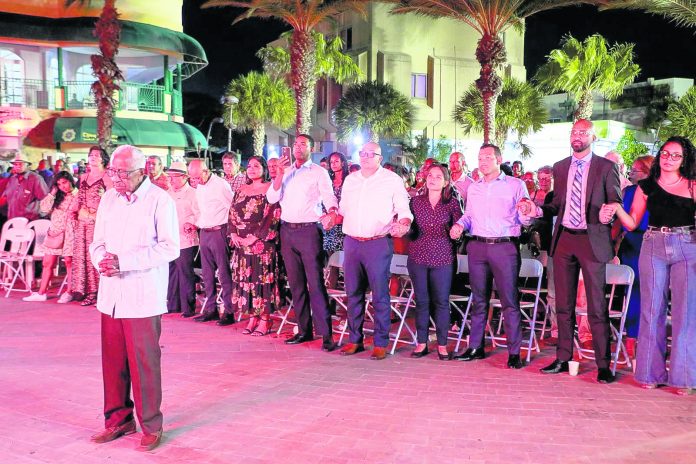 Recently, a big celebration was held in order to pay tribute to an exemplary Aruban citizen, Etty Toppenberg. During her speech at the event, minister of Culture, Xiomara Maduro, said how “Etty loves his neighborhood of Companashi, the neighborhood that saw his birth, say him grow and develop into one of the biggest talents in our country.”

Etty is very proud of his neighborhood, Companashi4ever and with pride, Etty writes on his Facebook page that Companashi, the smallest neighborhood in Aruba, received the most medals of merit from the Royal House.

As an artist of our country, Aruba, Etty won love and appreciation from us all. His trajectory in the musical world is impressive. Etty is going down in history asn the first Aruban singer who presented our national anthem, “Aruba Dushi Tera” during the inaugural ceremony of our Status Aparte, when Aruba became a country, right after midnight on the 1st of January, 1986.

Etty, together with his friends Eric Escalona and Max Hassel, formed the popular ‘Trio Huasteca’, and together with this Trio, Etty let his voice, and the name of Aruba, resound twice in the prestigious Festival OTI de la Cancion, an achievement of which Aruba is still proud today.

Etty and Trio Huasteca was one of the pioneers in tourism, working very hard to promote Aruba abroad. Also Trio Huasteca used to receive a lot of invitations, local and international, to delight the public with their songs and music. This is how Etty represented our country of Aruba many times abroad, singing and entertaining while at the same time promoting our beautiful country.

Another point on which the minister of Culture elaborated during her speech was that Etty received various awards, prizes and decorations. For Etty’s extremely valuable contribution on the cultural field, he received a lo of awards and decorations. It’s no secret that his voice and music is well liked by, and moves, members of the Dutch Royal Household.

Recently, Etty’s song ‘Nos Isla’ (Our Island) was heard in the park Magic Kingdom in Orlando, Florida, when Massive Brassband International played for the first time at this park. This brassband paid a beautiful tribute to Etty by presenting his song.

Minister Maduro expressed that as Arubans, our heart fills with pride when we hear this song presented by an Aruban brassband, playing an Aruban’s song.