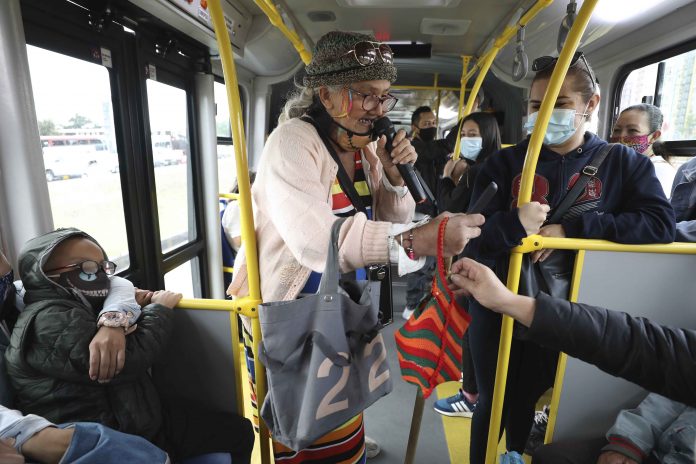 With her pink cardigan and thick glasses, “Toothless Cindy” is becoming a musical sensation on Colombian public transport.

When the music starts blasting from her portable speaker, the 69-year-old turns into a prolific rapper, whose rhymes crack up commuters on the Transmilenio, Bogota’s crowded and crime-ridden public bus system. Marlene Alfonso’s nickname — “Cindy sin Dientes” in Spanish — comes from the fact that she is missing most of her teeth and she says she can’t afford false ones.

“I’m trying to make something of myself,” she sings while riding on a bus packed with commuters heading into downtown. “If you can’t give me money, give me a kiss, that will fix my crooked neck.”

Marlene Alfonso, who calls herself ”Toothless Cindy,” or “Cindy sin Dientes” in Spanish, is one of dozens of Venezuelan migrants who work on Bogota’s public bus system every day, selling items like pens, or performing for tips.

Her advanced age, comical lyrics and unusual attire for a rapper have helped her to stand out. She has become an inspiration for a group of migrants that has been mostly welcomed in Colombia, but has also suffered recently from discrimination and xenophobic attacks.

“Its tough to make a living here,” says Haileen Volcan, a 32-year-old Venezuelan with five children, who sells puzzles for kids on Bogota’s buses. “But if she can hop on buses and work, a young woman like myself can sell things too.”

More than 1.7 million Venezuelans currently live in Colombia, where they have moved to escape their nation’s economic and humanitarian crisis. According to immigration officials, only 720,000 have a residence permit, which forces many migrants to work for less than the minimum wage or make a living as buskers or street vendors.

Alfonso says that she was already performing for tips in her hometown of Caracas, long before she arrived in Bogota. She worked mostly on subway cars, where her shows earned her an invitation to a local television program.

Two years ago, she moved to Colombia because rapping in Venezuela’s subways no longer helped her to make ends meet. Alfonso says she can make about $8 a day from tips on Bogota’s Transmilenio. It’s enough to pay rent and send some money home to her daughter.

“I’m showing people how to not feel defeated,” Alfonso said after finishing a set of songs. “Our hearts have no wrinkles in them. I’m 69 and there’s still a lot of juice to squeeze from this orange.”

But being a street rapper isn’t easy. Alfonso suffers from glaucoma and cannot see out of her left eye. She doesn’t have enough money to go to a specialist and moves around with a stick to avoid falling.

The grandmother can’t see the buttons on her speaker’s remote control properly, so she asks commuters for help to play the right tracks.

“We worry about her,” said Volcan, who frequently runs into Alfonso on the Transmilenio. “She lives up a steep hill and we’re trying to find her a place to rent that is closer to the bus stop.”

Alfonso presses on despite the obstacles and delivers her routine in which she encourages commuters to laugh because “humor is for free.”

Some take selfies with the toothless grandmother, and others have posted videos of her singing on buses that have gone viral on Twitter.

This growing recognition comes as some Venezuelan migrants also make headlines in Colombia for committing crimes that include robberies on public buses.

In Bogota, which is home to more than 350,000 Venezuelans, Mayor Claudia Lopez recently said that some migrants are giving her “headaches” and that “we should immediately deport anyone who comes to commit crimes.”

The declarations were applauded by some of her supporters, but also rejected by national immigration officials who said that only 4% of crimes reported in Colombia are committed by foreigners. The Interamerican Commission on Human Rights also reacted, asking Lopez and other public officials in Colombia to refrain from declarations that could “exacerbate xenophobia towards Venezuelans.”

Alfonso for her part says she is a “human and not a worm” in her latest song. And she disses Venezuelans who have broken local laws.

“Some of my brothers have come here to do bad things. I’d like to beat them up with my stick,” she sings. “I don’t support that, that’s a step backward. I’m just rapping to earn some pesos.”