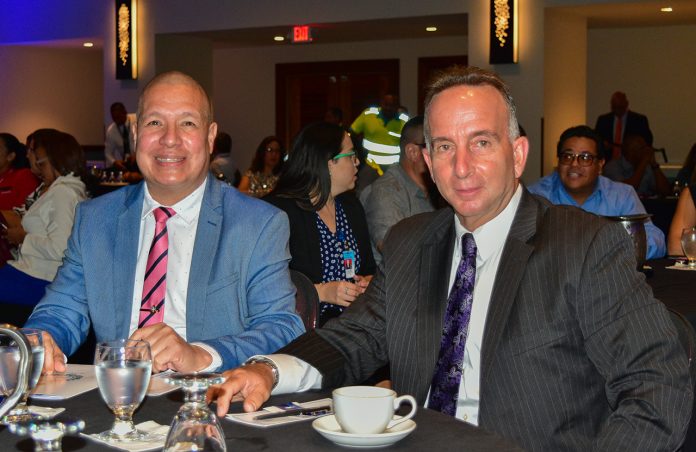 Aruba Airport Authority N.V. (AAA) in collaboration with JetBlue Airlines and Aruba Police Force recently organized for the first time an Active Shooter Awareness Seminar with over 240 participants. The purpose of the 2 sessions was to raise awareness on Active Shooter incidents and to equip participants with tips and advise on how to survive such an incident.

During the morning session, which was attended by local School principals, JetBlue Airlines presented their “Safe Schools Program” and focused on the effects of an Active Shooter event at schools. A survivor of a tragic school shooting in USA shared her survival story and elaborated on the Foundation she started after her experience. Aruba Police Force (KPA) shared how KPA prepares itself to respond to such incidents and valuable tips on how schools can have their staff and students prepare plans to save lives in the case of such an event.

The afternoon session was geared towards the Airport Community and included a Table Top Exercise led by JetBlue Airlines. Although an airport incident was depicted, the lessons learned apply in any work/life environment. KPA shared their experiences from the recent Active Shooter drill at the Airport and stressed on the importance of continuous preparedness trainings. KPA also shared valuable tips on how to react and act during such an event.

AAA CEO Mr. James Fazio indicated that Aruba Airport is one of the busiest airports in the Caribbean region, with 29 different airlines contributing in processing over 2.5 million passengers per year and for this reason it’s the airport’s duty to protect users of this critical infrastructure. An Active Shooter incident often times happens in a few seconds and it will take a few minutes before Police can reach the area. According to Fazio it’s crucial that the Airport community is made aware and prepared for such incidents, however unlikely we perceive these to be. Fazio applauds the cooperation amongst entities that recently organized the Active Shooter drill at the Airport as these types of trainings create awareness amongst all within the Airport community.

“Safety is our number one value, and we consider it important to collaborate with our business partners and members of the community to teach prevention and the appropriate response in a dangerous scenario,” said Mr. Jose Figueroa, JetBlue Director of Corporate Security for international markets. “Awareness and preparation are key to ensuring safety, and we’re grateful to the Government of Aruba, the Aruba Police Force, Aruba Airport Authority and our crewmembers and partners for helping us to offer the “Safe Schools Program” in Aruba.”

KPA’s Chief of Police Mr. Andrew Hoo indicated that although KPA’s focus has mainly been on providing valuable prevention presentations at several schools and other entities, it was the second time KPA conducted such a drill and the first time that KPA participated in a seminar geared at response and intervention. “The recent drills at the airport and the local school have provided our Rapid Response team with valuable lessons,” according to Hoo.

July 10, 2020
Lois was on the first flight in from USA, this was the 1.25pm arrival with United Airlines coming from Newark, New Jersey.

“The only dislike here is having to leave back home”