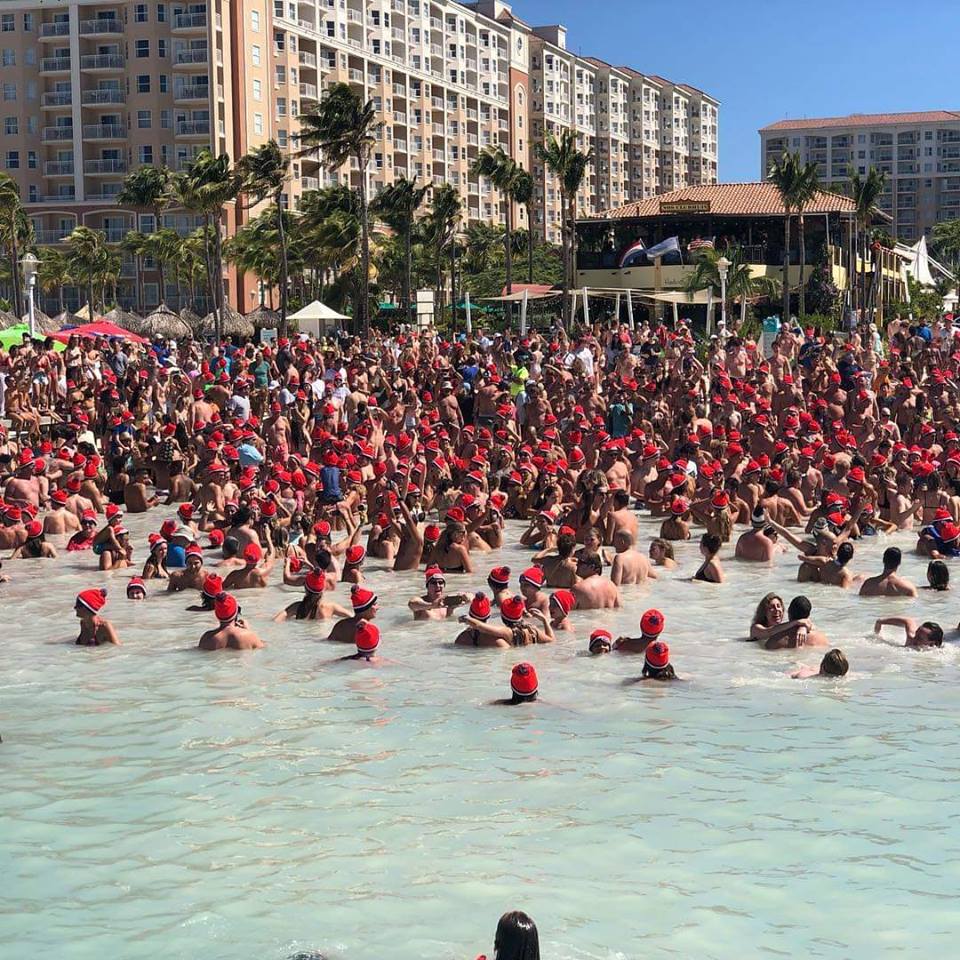 The story behind the orange Unox hats

NOORD — It was just last Tuesday January 1st that about 1,500 enthusiastic participants of the annual Unox New Year’s Plunge ran into the Caribbean Sea at MooMba Beach for the traditional “Nieuwjaarsduik”. For over 10 years locals and tourists the same gather at noon sharp at the popular beach bar to run towards the sea wearing the typical orange Unox winter hats. A tradition that originated in The Netherlands and is sponsored by Unox, a supplier of Dutch pea soup. The orange hats are such a big part of the tradition that you can’t imagine not having them during the event… well, we came close to that. Let’s go back in time a little…

On Thursday December 27th MooMba’s management received notice that the container with the Unox hats was stranded in Curacao, being disembarked there by accident. Contacting Curacao Customs learned that the container could not be opened there and that the container had to be shipped off again with an untouched seal. However, it would never make it on Aruba on time.

Other options as UPS, FedEx and KLM Cargo could also not get new hats in Aruba on time due to the holidays, so there was only one option left… book a flight to the Netherlands and send someone to pick up the hats. But how can you bring 1,000 hats (10 boxes) as luggage?

A seat on the TUI Dreamliner was booked and a MooMbs staffer was sent for a round trip to the Netherlands on a mission to bring back the orange hats on time for the Nieuwjaarsduik. In the meantime, Unox had shipped off new hats to a temporarily storage location as they too would be closed for the holidays.

After a 12-hour flight the MooMba representative arrived in the Netherlands on Sunday December 30th. After renting a vehicle big enough to carry on 10 boxes, he arrived at the storage location to collect the hats later that day. The next flight back to Aruba would not leave until the 31st, so in the early hours just 1 day before New Year he took the boxes with hats to Amsterdam airport. But how to you get 10 boxes of hats with a weight of 80kg from the car rental center to the check in desk of TUI, about a 20 minutes’ walk? That’s where Lennie came in. Lennie is supervisor at the porter service of Amsterdam Airport and he was willing to clear his already overly full schedule to carry the boxes to the check in area. He was so struck by the story that he even waived their fee. The look on the faces of the TUI ground crew was memorable when being confronted with 10 boxes of luggage for the Aruba flight. Calls where made to the TUI head office to get permission to bring on board the entire cargo, clearly exceeding the maximum weight allowance. But not only did TUI approve of the extra cargo, they even waived the additional costs. Chapeau for the TUI ground crew at the airport and the decision makers at the main office. Everybody seemed to realize that you can’t have a New Year’s Plunge without the hats and that you can’t disappoint so many people on the beach of Aruba.

After a smooth but long flight the messenger finally arrived in Aruba with the boxes, with the hats. At that time, it was already New Year’s Eve, just a few hours before Aruba customs would close for the night and just hours prior to the event at MooMba Beach. Fist Class VIP service at Aruba Airport was gracious enough to assist with the boxes and to roll them out of the airport… at that time it became clear: Aruba would have the Unox Nieuwjaarsduik in 2019 at MooMba Beach. And so, it happened… about 1,500 participated in the event, happy faces all around, orange Unox hats everywhere to be seen. If they just knew the story behind the hats. The Nieuwjaarsduik 2019 was saved just on time.