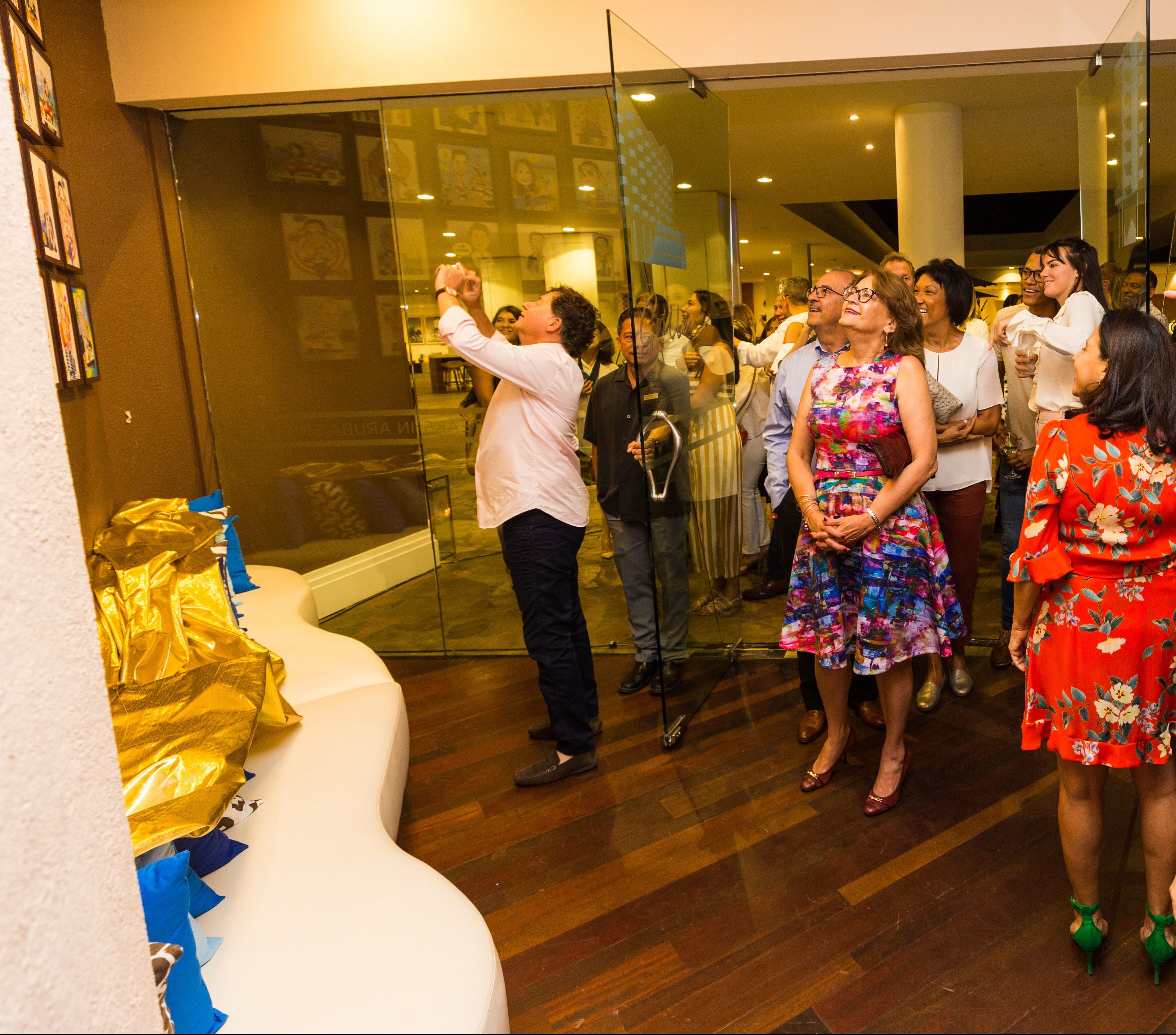 All Wall of Famers were invited to view their portraits and enjoy dinner in the elegant dining room or on the wrap-around terrace overlooking the Palm Beach tree tops.

Just before the unveiling, businessman Rene Kan shared some of the restaurant’s history and reminded the invited guests that from around the millennium, until the resort was recently refurbished by new ownership, the Aruba Growth Fund, walls were hung with caricatures of important locals, anchoring the restaurant in the island’s business life and honoring patrons who regularly brought their special guests for dinner. In that spirit, Kan explained the return of the wall turned into an art project. Rona Coster helped curate and coordinate the project, recruiting the help of a talented Florida caricaturist who also worked for the Miami Herald and the Sun-Sentinel, Florida’s largest daily newspaper.

One of the restaurant’s most exciting aspects is the return of executive chef Matt Boland. Chef Matt was the one who led the Sunset Grill to numerous AAA Four Diamond Awards in the 80s and 90s, and is the one entrusted with the task of returning the restaurant to its traditional steakhouse roots.

The Sunset Grille was the go-to place for getting business done and a place for those in the government to dine. “Please don’t hesitate to bring your guests and contacts back,” Kan said, “a new terrace was added last year, which makes the restaurant with its stunning views one of the nicest outdoor steakhouses in the world!” And with Boland in charge, one can look forward to an impeccable dining experience in a restaurant setting befitting the Wall of Fame personalities. Kan wrapped up his address stating that in 2015, the Aruba Growth Fund bought the property and branded it a Hilton. The following year the resort was remodeled, and operations really started in January 2017. Today, the company is proud to say that Hilton Aruba Caribbean Resort & Casino is one of the most successful Hiltons in the world, and has one of the highest occupancy rates in the chain.
Most importantly, the resort in Aruba enjoys one of the highest team member satisfaction scores, thanks to its talented and committed staffers.

From the very beginning, the company’s mission was to bring back the rich history of the Grand Dame, Kan stated. It did so with furniture and fixtures inspired by the sixties, with artwork hanging throughout the property, and with the recently renovated grand ballroom named after genius American architect Morris Lapidus. The most recent addition, the brand new Oscar’s Market in the lobby named after the late Oscar Henriquez, the Aruban hospitality visionary, is part of that philosophy. Q So much of what excites Kan about the Aruba Caribbean is its ability to bridge the past with the future. Arriving at the resort, one gets to see what made Aruba such an enticing island—the beautiful view of the ocean, the food, the celebrities, the stories of Oscar Henriquez, all tied to what it is still doing today: making Aruba the best tourist destination in the world. Guests of the property share in making that vision, a reality.

Not coincidentally, the week of the Wall of Fame unveiling, Hilton Aruba Caribbean Resort & Casino was bestowed with the highest honor by the Hilton International chain, by being named Hotel of the Year for the Americas.

The public is invited to come view the Wall of Fame, and stay for dinner with family members and friends. Sunset Grille is ready serve you with the best steakhouse experience under the sun!