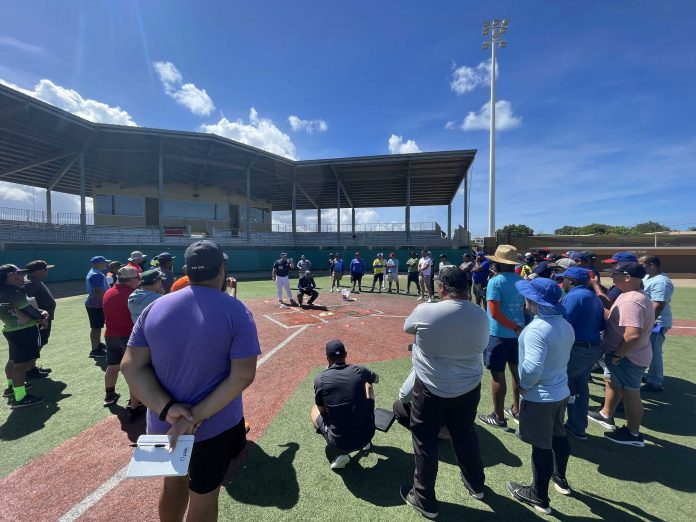 During the weekend of the 2nd, 3rd and 4th of December, the first coaching clinic by USA Baseball took place in Aruba. A weekend dedicated to improving the sport of baseball on our island.

Friday afternoon, the Meet and Greet took place in Local Store, allowing the local coaches to meet more closely and have a chat with the coaches of USA Baseball. In a friendly atmosphere, the four coaches were presented and this way, the event was kick started.

On the 3rd of December, the first session began at the University of Aruba at 12:05pm sharp. It must be noted that this was attended by 70 coaches from different organizations in Aruba, and two of them were female.

During this session they elaborated on different aspects, for example infield, hitting, base coaching, outfield, pitching and baserunning. Even though the session lasted five hours and was dedicated to the theoretic part, the questions and interactions were great, and were well received by the coaches of USA Baseball. The atmosphere was very positive and filled with energy. Most importantly, it showed that the coaches are here to continue developing themselves as a coach. Without a doubt, some topics were new, and some were being refreshed, but everyone present learned something on this first day. At the end of the session, all four coaches received a beautiful souvenir of Aruba.

On Sunday, at 9am the second session began at the Nadi Croes/Crismo Angela station and coaches had to come on the field to see and put what they learned the day before into practice. Attendants had the honor of having Mr. Randolph Oduber, executive member of WBSC as a participant, and he joined during both days in his role as coach. The sun was shining brightly, but the participants persevered until the end, and they received their participation certificate.

Sr. Elston Figaroa, president of Aruba North Little League emphasized: “This was the first clinic, but we are sure it will not be the last one. The coaches of USA Baseball were extremely satisfied with the organization and the participation of the local coaches. And we received good comments from our local coaches.”

It was admirable to see so many coaches coming together to the benefit of sport and our children. On the images, a hidden message becomes visible: if we work together, we can all achieve.
Thanks go out from the organizers to all participants, the speakers of USA Baseball, all organizations that helped us to give the best possible treatment to our guests, and of course, to the team of Aruba North Little League.