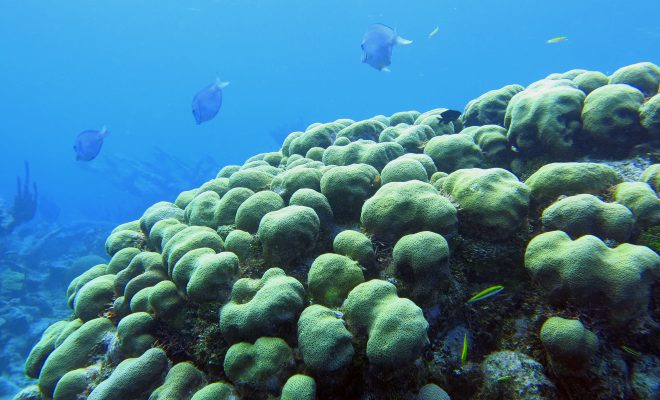 Since 2014, a new coral disease has been spreading through the reefs of the Caribbean. Known as Stony Coral Tissue Loss Disease (SCTLD), this disease appears to be fast spreading and extremely lethal to the corals that are susceptible to it. In August a meeting was organized by MPA Connect where experts met to discuss lessons learned from Florida’s management of this disease and discuss best practices for identifying and treating infected corals for the future.

These results have been summarized in DCNA’s Stony Coral Tissue Loss Disease Management Letter for the Dutch Caribbean. The capacity building efforts done throughout the Caribbean was presented at the yearly Gulf and Caribbean Fisheries Institute (GCFI) meeting this month in the Dominican Republic by Dutch Caribbean Nature Alliance (DCNA)’s director Tadzio Bervoets.

The Disease.
A new coral disease was first identified off the coast of Florida in 2014. Since then, it has spread throughout much of the Caribbean, including Mexico, Jamaica, Sint Maarten, Sint Eustatius, the Dominican Republic, and the U.S. Virgin Islands (AGGRA, 2019). This disease is known as SCTLD, nicknamed “skittle-D”. To date STCLD has only been seen in stony corals and causes significant tissue loss within affected hosts. This disease spreads fast and can have devastating effects on the reef if not treated immediately (Florida DEP, 2019). Dr. Andy Bruckner, Research Coordinator at Florida Keys National Marine Sanctuary stated “Stony Coral Tissue Loss Disease affects some of the slowest-growing and longest-lived reef-building corals, including the iconic brain corals, star corals and pillar corals.”

Symptoms.
When a coral contracts SCTLD it begins with visible lesions which spread out from around the host’s edge. Here the coral tissue can become detached or completely removed, which leaves the coral structure as a bare skeleton typically covered in algae within a week (Florida DEP, 2018). This disease has been document in over 20 different species of coral, including five species listed under the Endangered Species Act (Florida DEP, 2019). Onset appears to infect highly susceptible species first. The disease spreads rapidly with total mortality of infected specimens ranging between 1 week to 2 months (AGGRA, 2019). Typically, a month after the disease has been reported in highly susceptible species, it begins to infect intermediately susceptible species. Within these species, smaller colonies have been seen to die off over the course of months and larger colonies have been seen to host the disease for years without suffering complete mortality.

Transmission.
It is now believed the SCTLD is transmitted through direct contact and water circulation (Reef Resilience, 2019). To minimize its spread, officials are now recommending extreme caution for divers around infected corals, and urge divers to fully decontaminate their gear between dive sites to avoid spreading the disease (Florida DEP, 2019). In addition, it is strongly encouraged that if a coral is suspected of being infected, it should be reported to the appropriate authority immediately for immediate action (Florida DEP 2019).

Knowledge Sharing.
On August 1st of this year, a group of 22 experts from 17 countries met in Key West, Florida to share information and discuss how to best manage SCTLD outbreaks (GCFI, 2019). Participants were able to work directly with leading SCTLD experts from Florida and learn how to properly identify the disease and manage infected corals effectively. Florida has had positive results treating infected corals with a variety of antibiotic regimes; however, this is still being tested and regulatory frameworks concerning the use of such treatments varies between countries (Reef Resilience, 2019). During the 2019 Gulf and Caribbean Fisheries Institute (GCFI) meeting this month DCNA director Tadzio Bervoets presented the various capacity building efforts done in the region through the MPA Connect/ GCFI network, giving marine resource managers the means necessary to respond to the disease. Bervoets also presented the Stony Coral Tissue Loss Disease Management Letter for the Dutch Caribbean which provides Marine Resource Managers in the Dutch Caribbean the information necessary to preparade for, monitor and respond to the disease.

Protecting the Future.
With harsher environmental conditions stressing corals, these species will continue to become more susceptible to disease in the future. SCTLD is of particular concern as it appears to be long lasting, wide ranging, highly contagious for a large number of slow growing, reef building species and has been seen to result in total colony mortality once infected (Martinelli, 2019). Increasing public awareness and proper diving practices will be crucial for managing this disease. Researchers are continuing to test intervention methods to minimize mortality rates and prevent further infection. Until this disease is better understood, it is crucial for divers and researchers to carefully track its progression. If you believe you’ve spotted an infected coral, please report the date, GPS location, and if possible, a photograph, to your local marine park authority. q