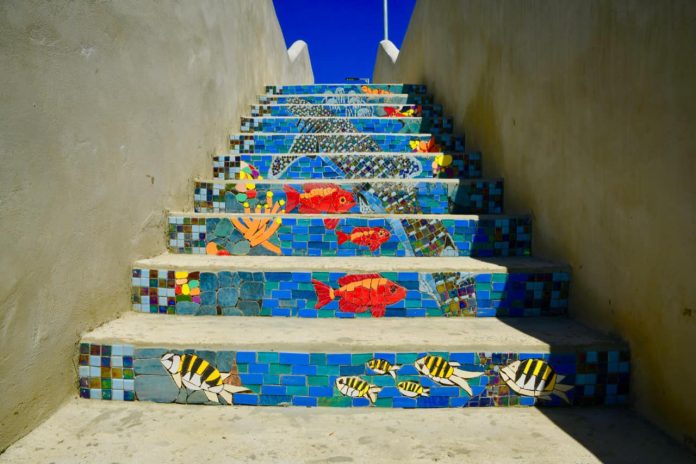 This week during an extraordinary press conference, the official inauguration of the stairs project at Rodgers Beach in Sero Colorado took place. Aruban minister of Tourism, Mr. Dangui Oduber was present for the inauguration.

“The policy and vision of the Ministry of Tourism is directed on sustainable policy to attract affluent tourists, ensure the diversification of our tourism and continue investing in the product Aruba in order to offer a quality product, but also to keep our product competitive”, Oduber commented during the inauguration.

He explained that since 2018 they had already announced a master plan for this area of Sero Colorado which includes enhancement and beautification of the entire area of Baby Beach and Rodgers Beach. In 2019 they were ready to begin executing the project and even held a groundbreaking ceremony for the Baby Beach project with the intention of executing all of this in one sole phase.

However, at the outbreak of the Covid pandemic in March 2020, the project was delayed for almost two years, during which practically no investment was done because the focus of the government was at that moment on managing the outbreak.

Oduber explained that once the pandemic was under relative control, they picked up the project, leaving the entire master plan with all the projects and plans on the table and announced the first phase of the Baby Beach project.

Now this first phase has been delivered. Phase two was announced, public tender has taken place and the awarding will also begin. Phase three was also announced and execution will begin soon. “This will also become a beautiful project for Baby Beach, where we are going to improve infrastructure, ensure that there are facilities, fix tennis courts, ensure for good landscaping and this way improve the entire area of Baby Beach”, Oduber pointed out.

Regarding the area at Rodgers Beach which is part of the master plan for Sero Colorado, Oduber indicated that the intention is to expand the beach, create facilities and ensure that it becomes an attraction not only for locals but also for tourists.

“We brainedstormed and arrived at the idea to make the stairs, which have 50 steps, a tourist attraction. This is why we also approached local artists to help us think about a design which will become a tourist attraction as well as for locals to take pictures and use it as an ‘Instagrammable moment’”, Oduber commented.

This project was executed in the past two months, and finally the moment to officially deliver the project came, a project that fits in the policy and vision of the Ministry of Tourism.

Oduber emphasized that the inauguration of the stairs goes along with the vision presented by the Ministry of Tourism in 2018 to complement and realize the master plan for Sero Colorado.

“I am glad that phase after phase we can materialize and crystallize the beautiful vision that we had for the improvement and beautification of this entire area, because I am convinced that this project, even though it can be a small project, has a big meaning for this area. Because it will become a big tourist attraction where thousands of tourists will visit the area specifically to see the art and take pictures”, he highlighted.

Oduber thanked the infrastructure commission that was established some time ago in order to plan, prepare and execute the various projects to enhance the product Aruba in its entirety. The commission consists of the Ministry of Tourism, Aruba Tourism Authority, DIP, DOW and TPEF, and they also consulted with DNM and the National Park on the different projects.

Oduber recognized and gave special thanks to all artists who worked on this project. “During the long days they worked from morning to night with a lot of passion, a lot of dedication to present a beautiful project of which we can all be proud.”