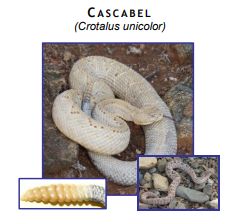 Arikok National Park is home to various unique plant and animal species such as Aruba’s rare endemic rattlesnake Crotalus unicolor. This rattlesnake is locally known as the ‘Cascabel’.

Paseo Herencia continues with its ‘Gift of Education’ program