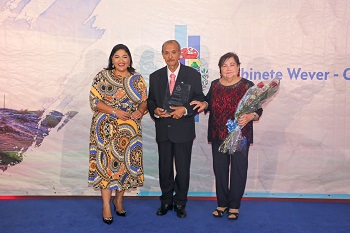 On November 22, 2022, during a special event held at the John F. Kennedy Education Center, the Ministry of Culture, recognized six musical legends in Aruba on Saint Cecilia Day, the Patroness of music.

Mr. Victor Nicolas Camacho is a pianist who represented Aruba on various occasions and delighted tourists with his music at different hotels. Currently, he is performing as a solo pianist at the Riu Palace Hotel. He produced and composed many songs for the Voz-I-Landia competition and produced many records honoring Mr. Rufo Wever and Padu Lampe. He also performed with Savaneta Steelpan at the Cas di Cultura in 1965 for former Queen Juliana and Prince Bernard.

Mr. Hyacintho (Casin) Giel is a guitarist, pianist, and singer. He sings rancheras and boleros. He started his band ‘Cassenger Sweet Band’ and is a co-member and co-founder of many other bands like Super Combo Casino and Triple S.

Mr. Giel is the composer of most of the songs of Doble Sabor. During the Carnival season, he competes with his compositions at the Tumba Festival. He is Aruba’s first Tumba King.

Mr. Felix (Chucho) Hoek has composed and arranged for many singers and bands. He is also known as a jingle arranger and composer. He was a member and director of numerous bands and assisted them in festivals and concerts. He was an instructor of classic, electric guitar, and bass guitar. He also gave theory classes about harmony, arrangement, and vocal and is now director of the Stichting Arubaanse Muziekschool/Scol di Musica Rufo Wever.

Mr. Roland Naricisio (Chicho) Kock, is a band and steelpan player. He plays bass guitar, guitar, drums, conga, and timbal. He performed, played with bands, performed at hotels, and played with well-known local and international singers.

Mr. Cesar Olarte was born into a musical family and surrounded by musicians throughout his childhood. He grew up with rancheras being part of the Mariachi Perla di Aruba family. From early on, Cesar dominated different musical genres like R&B and has delighted crowds both in Aruba and internationally. His greatest achievement was winning the Latin Grammy with Chichi Peralta & Son Familia.

Together with Mr. Carlos Bislip and Mr. Delbert Bernabela, they form the Jazz trio of The Aruba Art Ensemble. Ivan performed at various local and international jazz festivals and was also part of various musical bands as a bass guitarist.

The musical career of these six musical legends is impressive and extensive.

The Minister thanked each one of these musicians for their contributions and musical creations.

Their songs inspired and contributed to f our cultural musical heritage and the promotion of Papiamento internationally.

Minister of Education met with EducationUSA Aruba to discuss points of...