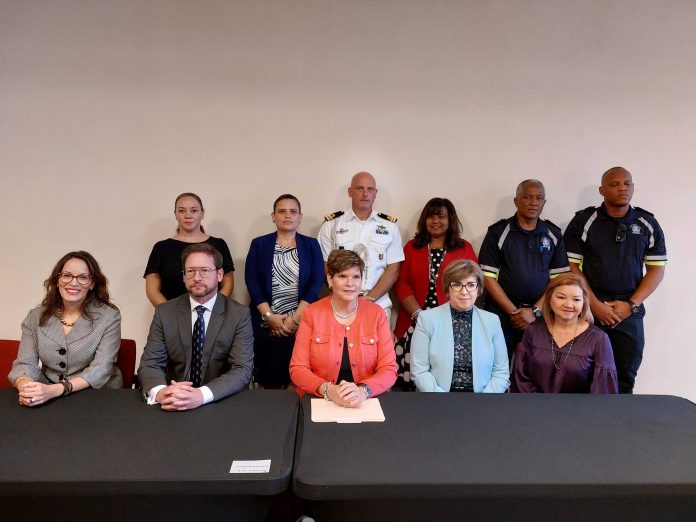 As was previously announced, Aruba is preparing to receive a royal visit on the 30th and 31st of January. King Willem-Alexander, Queen Maxima and crown Princess Amalia will be visiting the six islands of the kingdom of the Netherlands at the end of the month. The president of the commission in charge of the royal visit in Aruba elaborated during a press conference on the program of activities for the royal family’s visit.

The president of the commission explained that the entire program is open so that the public can come close, stand on the sidewalk and greet the royal family. However there are three moments in the program that create an opportunity for the people to come in great numbers to great our king, queen and heir aparent.

These moments are in front of the Parliament of Aruba, in San Nicolas and during the Bon Bini Festival.

The official program will begin on the 30th of January. At 10:30am the royal family will land in Aruba, and they will not be coming directly from the Netherlands but from Bonaire, where the royal visit is officially starting.

After Whilhelmina Park the delegation will walk to the Ceremonial House of the Governor for a meeting with the Governor of Aruba. After this they will be walking on the main road towards the Parliament of Aruba. On the right hand there will be a presentation by a youth choir, dance group Pierewietje that will delight the guests with some beautiful songs and then they will meet Leerorkest – the student orchestra of Aruba.

At the Parliament the royal family will be welcomed by the president of Parliament, who will accompany the royal delegation and introduce the leaders of the different political parties.

Afterwards the delegation will depart for the hotel for a short break.

Following the break, the entire delegation will go to San Nicolas. The first visit will be at Filomena College for a presentation of a mural honoring our World War II hero, Boy Ecury. There will be a theatre play presentation by the school’s children as well as a presentation regarding Boy Ecury and what he means for Aruba.

Afterwards they will visit the Industrial Museum of Aruba. “The Industrial Museum is important for us to emphasize the economic development that our country has seen since the 1800s. For us it is important that Aruba has always gone through hardship, economic hardship, but the people of Aruba are always known for our resilience and determination, and this is also being shown by the people of Aruba today. This is something we want to share with the royal visitors,” the president of the commission explained.

This visit will conclude in San Nicolaas Store, where the royal guests will be delighted with a cultural demonstration. In this case attention was given to the fact that the princess is a young 18-year-old and they want to share some youth culture with her.

The presentation includes street dance, spoken word and will be concluded with a carnival show by children.

After leaving San Nicolaas Store, the delegation will arrive at the Marinierskazerne – the marine barracks – where they will board a Coast Guard boat and navigate to the hotel area, while admiring beautiful sceneries of Aruba, concluding the first day of the royal visit.

The second day on Tuesday will begin early morning with a hike in Aruba’s nature, starting at the Franse Pas, the gold mine ruins. Here the royal delegation will receive a tour and information and they will see a Shoco nest – Aruba’s endemic burrowing owl.

Afterwards they will go to the skirts of the Jamanota hill, which they will climb to enjoy Aruba’s nature. Here the royal delegation is guests of the Arikok National Park which will provide guidance and information.

Following the walk the delegation will visit the Visitors’ Center of the park and see the center of farming where certain special plants are being grown and will be introduced to the project.

At the Hofi Shoco they will meet the junior rangers and the board of the Arikok National Park who will inform them of ongoing projects regarding nature conservation.

Following the park, the royal delegation will visit Aruba Aloe, which recently received the title “royal”. This makes it the first company outside of the Netherlands to receive permission to use this title. “Because they complied with all requisites, which is not easy, to receive this seal – the crown above their logo. Naturally this enhances the Aruba Aloe brand but also the country of Aruba.”

Here the delegation will experience the production in practice, they will receive information particularly from young people working at the plant and they will walk on the aloe plantation. Princess Amalia will cut some aloe and they will sit down and make some aloe products.

Afterwards they will enjoy a lunch at the Whilhelmina Restaurant, and continue on to the University of Aruba, where they will meet with lecturers and students.

Following this visit the King and princess will depart for the Frans Figaroa Sports Center where they will have a meeting with male and female soccer academies. The Queen will visit Qredits Aruba, a project of small credits, which is a subject close to the Queen, and she will receive information regarding a project focused on agriculture.

The program for the royal visit will end with a visit to Fort Zoutman, which will begin on Plaza Padu. They will walk on the entire plaza and meet with artists and artisans and receive various presentations, dance shows and there will also be video mapping projection on the Parliament building.

Afterwards they will enter Fort Zoutman where they will experience a portion of Bon Bini Festival. “We believe that this is something that will give them a good insight of the culture, music and dance of our country.” The night will end with a Carnival show accompanied by a brass band that will invite them to walk slowly on the road in front of the Cabinet of the Governor after saying goodbye to the people of Aruba, finalizing their visit.

Confidence continues to build in the recovery with growth in airline...

Aruba to me; Ron and Nonnie Rubin