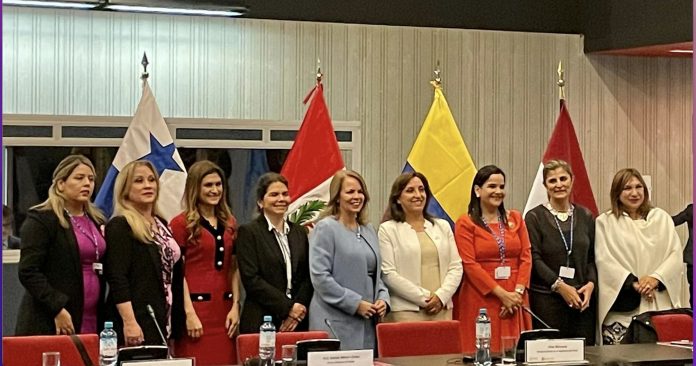 During the General Assembly of the Organization of American States (OEA) which took place this week in Lima, Peru, Mrs. Evelyn Wever-Croes, as prime minister of Aruba and as part of the Kingdom of the Netherlands had the opportunity to participate as speaker in the forum regarding female leadership in international politics in order to fight inequality and discrimination of women.

This was a high level dialogue with female ministers of foreign relations from the American continent.

Prime minister Wever-Croes commented that it is sad to know that inequality between men and women is increasing around the world, and our region is heavily affected by this inequality. There are very high indexes of inequality in our region that are negatively impacting the wellness of everyone. Alarming data regarding femicide y violence against women is proof of a high index of inequality.

The Government of Aruba and the Kingdom of the Netherlands recognizes the urgency to double the efforts regarding gender equality. While gender inequality is getting worse worldwide, the violence against women and girls is increasing, and workers in the informal sector, who in their majority are women, are those who are more heavily affected economically.

According to data from CEPAL from 2020, 19 percent of youths between the ages of 15 to 25 in Latin America are neither studying nor working, and among women the percentage is 26%. The main reasons for this, in the case of women, are the work of homemaker, for which they are not paid.

According to the report “The Pandemic in the shadow of CEPAL”, at least 4091 women were victims of femicide in 26 countries (17 countries in Latin America and 9 Caribbean countries) in 2020. These data are very worrying, and for this reason, it is imperative to act now.

The Kingdom of the Netherlands joins itself to the group of pioneers that adopted a Feminist Policy of Foreign Relations. The basis is that there exists a direct relationship between gender equality, economic prosperity and national security. With a wider gender equality, the resources of society can be more balanced. In the principle of Feminist Policy of Foreign Relations, gender equality needs to be central in every international agreement: in cooperation for development, international commerce, defense and diplomacy. Bigger and more elevated equality of rights results in more economic prosperity, more sustainable development and more international security for everyone. Everyone will benefit from gender equality, men and women.

It is important also to mention that a Feminist Policy of Foreign Relations can contribute also to a world that is fairer, where men and women can have the same rights and opportunities. In order to make this possible, it is necessary to promote treaties and agreements on the matter.

If we truly want to deal with the fundamental causes of inequality and poverty, it is crucial to apply a gender perspective in everything we do.

Aruba is now under Code Orange: It’s important to prevent and...