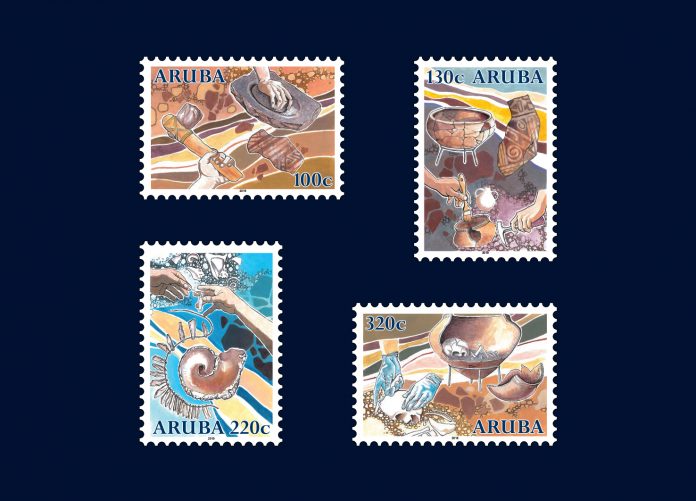 The set consists of four stamps namely 100c, 130c, 220c and 320c, for a total amount of Afl.7, 70. The first-day-envelope costs Afl. 9, 45. The stamps are designed by Alfonso the Windt. They are printed by the Johan Enschedé Security Print.

This stamp represents an Ancient Hammer and Grain Grinder. Imagine all the tasks you do in one day and the many different tools needed to complete them. Amerindians spent a lot of time making, recycling and repairing tools from the materials readily available to them such as stone, shell, coral, wood and bone.

This stamp represents bowls, utensils and cups, everything you need to eat, drink and share food. Although the materials are different, ancient dishware served the same purpose as it does today. The kitchen was and is a busy place. Amerindians worked together to prepare and cook food in communal areas outside the home. Archaeologists have discovered many artefacts used for processing and storing food.

From the smallest pendant to the most finely decorated ceramic, the skill and creativity of Amerindians is unmistakable; drilling, polishing, painting, grinding modeling. These were just a few of the techniques used by artisans. This skill is most prominently displayed in exquisitely crafted stone and shell beads. The workmanship is so precise, that attempts to replicate it have failed. Finely crafted pottery was delicately painted, molded, incised and punctured. Bead necklaces were not only forms of decoration and personal status, but also used as currency in trading relations. The value was determined by the craftsmanship, the length of the necklace and the size of the beads.

In Aruba, both shell and stone necklaces have been discovered, although shell was much more common. Among the Caiquetio, the smallest, most finely crafted beads would have held the highest value. The skill required to shape and drill these tiny pieces was very much appreciated. Many of these objects were discovered in graves, illustrating their importance. Huge deposits of shells called “shell middens” have been discovered in Aruba. A “shell midden” is a heap that is primarily made up of shells and marine remains that have been discarded after the edible part of the animal was removed. Most “middens” are located near the shore except for one pre-ceramic deposit located inland at Malmok near a burial site. Archaeologists study “shell middens” to discover what kind of food ancient people ate. These deposits show that Amerindians ate conch, turtle, clams, fish and snails.

Amerindian burial practices were deliberate and often elaborate, incorporating rich grave goods that identified the person’s status in the community. During the Ceramic Period, the house functioned as both living space and burial ground. Many graves were discovered under the dirt floors of houses and village plazas. People living in the Ceramic period often buried their dead in jars or urns. This type of burial is referred to as an “urn burial”, which can be divided in primary and secondary. In a primary urn burial, the individual is buried right after death and all bones are present. In a secondary urn burial, all or some of the bones from a body buried in a pit or left to desiccate in the open air, are collected after some time and reburied in an urn.

These stamps are available at all the Post Office locations in Oranjestad, San Nicolas and Sta. Cruz. Make sure that you have this set in your collection as the stock is limited. For more information on the “Archaeological Stamps 2019” issue, please contact the Philatelic Department at +297 528-7678 / main office located at J.E. Irausquinplein # 9, Oranjestad or visit their Facebook page: Aruba Stamps and Webpage: postaruba.com. Q

FPNA presents the winners of its Nature Photography Competition 2021