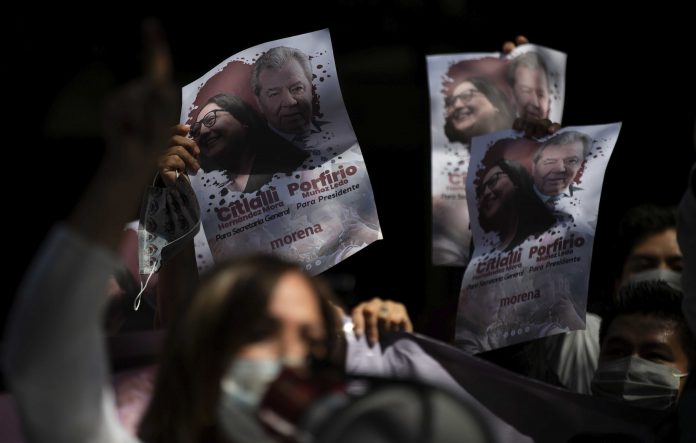 Andrés Manuel López Obrador created his own party to win Mexico’s presidency. Now its internal weakness and divisions threaten to undermine his administration.

López Obrador’s National Regeneration Movement — known to all in Mexico as Morena — has been trying unsuccessfully for a year to pick a party president, and it’s not going well.

In reponse to a lawsuit over the delays, judges ordered a leader chosen by a poll run by federal electoral authorities. But that wound up in a technical tie. Electoral officials say they’ll try again.

The result is a bitter dispute between an 87-year-old political warhorse who previously led two other parties and his less prominent 48-year-old rival.

Immediately at stake is the president’s now perilously thin majority in Congress, with midterm elections set for next year and the party lacking formal organization in most of Mexico’s 32 states. It holds only seven governorships.

Beyond that is the question of whether Morena, in its present form, will outlast the presidency of its creator, who is constitutionally barred from reelection.

Morena exists only because López Obrador was unable to fully control the leftist party that sponsored his first two, unsuccessful runs for the presidency, Democratic Revolution.

When legal maneuvers left rivals in charge of the party known as the PRD, López Obrador — by far its most popular figure — led a mass exodus and turned Morena into a party in 2014.

He wove together his fellow PRD dissidents with breakaway members from other parties — some true believers, some jumping on the bandwagon of a man who was clearly favored to win the presidency in 2018 and some who hoped to wipe away controversial pasts by embracing a man famed for personal honesty.

With the other major parties discredited by their recent turns in power and a seemingly endless string of corruption scandals, López Obrador carried Morena to a 30% winning margin, vowing to launch a “transformation” toward cleaner, more honest politics, closer to the people.

But with López Obrador focused on governing, the party has floundered.

“Morena is everything, and nothing at the same time,” said Hugo Concha, a political science professor at the National Autonomous University of Mexico. “One day you hear crazy proposals, and the next day they change their opinion,” Concha said. “It is very hard to send a signal to the people, ‘Here are different ideas.”

The conflict maddens some party members.

“We are caught up in an absurd dispute,” said retired pharmaceutical industry executive Aurora Pedroche, 64, who joined the party at its start. “Morena is severely broken, but we are going to close ranks around whoever wins.

The only good news for Morena is that the two main opposition parties — the Institutional Revolutionary Party, or PRI, and the conservative National Action Party, are arguably in worse shape.

The PRI ruled Mexico uninterrupted from from 1929 to 2000, and still has the most governorships, 11. But its brief return to the presidency in 2012-2018 was so marked by debilitating corruption scandals that the PRI now seems cowed and rudderless.

López Obrador has proved himself a master at the kind of politics — charismatic leadership, ardent nationalism and governmental handout programs — the PRI once specialized in.

National Action, a conservative party that offers the clearest alternative to López Obrador, is still distrusted by many due to two lackluster terms in the presidency from 2000 to 2012. Some party factions have been drawn into counterproductive demonstrations of rage against the president.

The two candidates for Morena’s presidency are Porifirio Muñoz Ledo, a former leader of the PRI who has been critical at times of López Obrador, and congressional leader Mario Delgado, seen as more obedient to the president.

Muñoz Ledo claims he won last week’s poll, though the national electoral institute says it was actually a statistical tie and it plans another poll to settle the issue.

Muñoz Ledo has jumped from one party to another throughout a career that began as a student leader in the mid-1950s and established him in Mexican history as the first opposition party leader of Congress in 1997. He has been willing to criticize López Obrador’s heavy-handed approach to catching and deporting Central American migrants who try to cross Mexico to reach the United States.

As Concha puts it, Muñoz Ledo offers “a relationship of mutual respect, but not unconditional subservience,” while Delgado appears more a stalking horse for the party’s centrist foreign relations secretary, Marcelo Ebrard, one of the president’s longtime allies.

“A leader cannot listen only to the voice of servile (followers), but rather of those who are critical,” Muñoz Ledo said in an interview with The Associated Press. He said he wanted the administration to evolve from a “caudillo presidency,” one based on a charismatic chieftain, “to a parliamentary presidency.”

But it is not clear that Morena ever can become more than a shadow of López Obrador.

“In Morena, the charismatic leader is in charge, whoever the bureaucrat is who happens to hold the party presidency,” said Flavia Friedenberg, a professor at the National Autonomous University. “A party only becomes an institution when it outlives its leader.”

At least ten reef-associated shark species in the Dutch Caribbean

January 15, 2021
The demand for fins and other shark products has driven a number of species close to extinction.

The history of Aruba