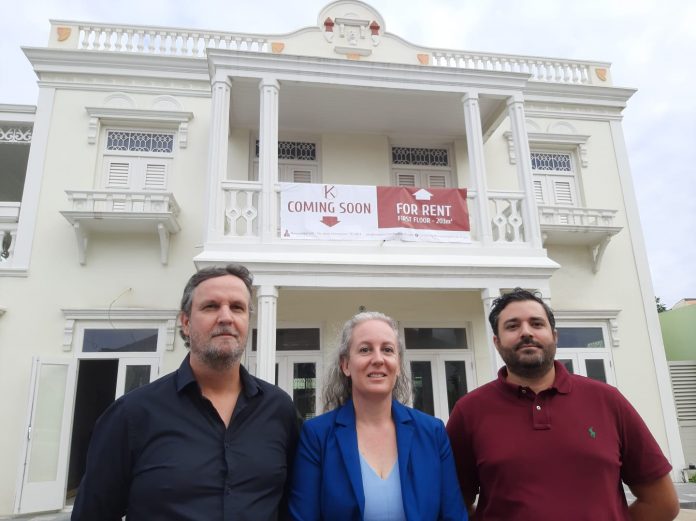 Last week it was announced that part of the monumental building known as ex-Botica Aruba, situated in Steenweg in the city center, will become a restaurant. Stichting Monumentenfonds Aruba said that this is the second phase of restoration for this building.

Anne Witsenburg, director of Stichting Monumentenfonds said that this building was constructed in 1925 by Adison Croes, and in 1935 they opened the first pharmacy – “botica” in Papiamento – called Botica Aruba through the Nouel family, who lived upstairs while the pharmacy was downstairs.

In the beginning of the 1990s, they sold the house, where afterwards El Mercado was opened in 1993. At this stage the building was expanded, thereby losing some of its original state, as confirmed by Witsenburg.

Later that business closed its doors in 2015, and Stichting Monumentenfonds purchased the building from them, presenting a plan to restore it and give the building a new life. A group of artists was introduced to the building to use it from 2016 until 2019 under the platform BEAM while the plans were in process.

After that, the restoration began on the outside of the building, “which is why it’s pretty like this and has its original colors”, Witsenburg said.

When the Covid-19 pandemic broke out in Aruba, it was very difficult to find a tenant to make use of the building, and for some time it was empty. However, this year Stichting Monumentenfonds signed a lease agreement with a new tenant, whereby the building will begin the third function of its life and become a restaurant.

“We are very proud to announce that beginning of 2023, in the first months, as we don’t have a precise date yet, the restaurant Koal will open”, Witsenburg announced.

Albert Raven together with Tommie Rensen, owners of what will become Koal restaurant, told the media present that they will be using the lower level of the building where they will open a restaurant with the “chef’s table” concept, available to only 16 people per night. “It will be very intimate and special, where I will be cooking and Tom will be serving our guests”, Raven said.

This is because, as Raven said, many times the chef does not get the opportunity to connect with the guests, and this “chef’s table” setting will give the opportunity for everyone to have more contact with each other on a more personal level. “I think everyone is in search of that”, he said.

The restaurant’s concept is basically whatever they want to cook, which means each night there will be different food. “It will be mostly what is available locally. We will focus on local products and also a bit international”, Raven pointed out. He also said that he has a lot of experience in this sector, working in Abu Dhabi and Dubai. He has a lot of Asian influence and he will try to mix this with the Aruban culture.

Raven also grew up in Aruba, and he said that it’s great to see how the streets in the city centre began coming back to life.

About choosing this location, he said that they were searching for a spot and an acquaintance told him to ask about the building at Steenweg. When they saw the building, they realized it is ideal to open their restaurant.

They plan to open around February, but this also depends on materials and the process of opening, as the place needs to be ready. “Local clients will always be welcome, but visitors also, we are open for everybody”, Raven said.

Witsenburg added that the tenants will only be using one floor, which means that they will continue searching for a tenant for the top floor of the building. She said they are already in contact with an interest party and they hope that soon the top floor will also be occupied.

As a foundation, they provide guidance to the tenants about changes that can be done to the building inside, if they can change the color of the walls for example. But as a foundation they take care of the entire maintenance of the outside of the building and also any repairs that might be needed, seeing as it is a monumental building.

Regarding all monuments that are protected by Aruba, Monumentenbureau is the organization that hands out the rules. They also have rules that Stichting Monumentenfonds follow, anything they do they receive permission from Monumentenbureau.

Watch Out For Blue Crab Migration near Savaneta