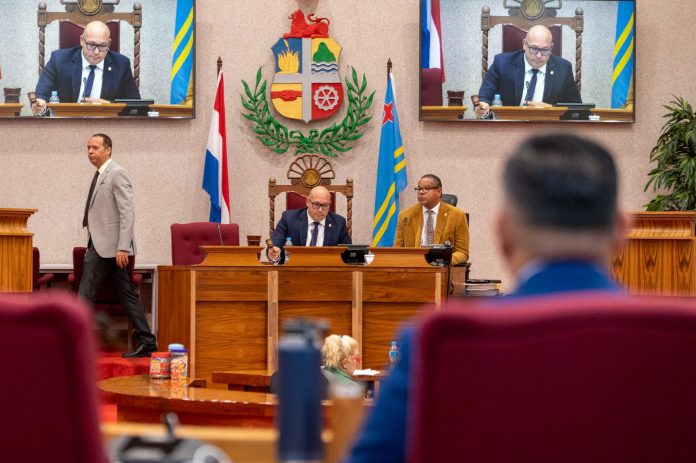 Yesterday the session regarding the national budget for 2023 continued in the Parliament of Aruba, in the presence of minister of Transport, Integrity, Nature and Senior Affairs, Ursell Arends, who answered different questions from members of Parliaments from the coalition parties, MEP and Raiz.

In his answers, Arends emphasized the word “integrity” that is mentioned a lot recently, indicating that as politicians they all need to reflect for a moment on how this affects each of them in the eyes of the community.

He was asked what he is doing regarding integrity. He elaborated about Corporate Governance code, the legislation that was also presented in the Consultative Congress on the 3rd and 4th of November, where for the first time they presented a legislation draft – Landsverordening Corporate Governance and draft Code Corporate Governance – to provide space for all organizations that need to deal and work with this law to give their input and the law can go through the necessary process. Arends said that the organizations have three weeks to give feedback, there are around 80 organizations as well as students from the University of Aruba who took part in the Consultative Congress.

Once the feedback is received, it will be processed together with the Corporate Governance Commission, Themis Institute and wetgeving jurist (law attorney) who are working on it so that the law can be sent to Directie Wetgeving en Juridische Zaken (DWZ – Department of Legislation and Legal Affairs) and continue the formal process to eventually arrive to Raad van Advies and the Aruban Parliament.

“The concept was sent also to Parliament, and this does not mean that Parliament agrees with it de facto, but you as members of Parliament can also use the opportunity to review the concept and if there are any changes you want to see in the concept.”

Regarding the Bureau of Integrity – Bureau Integriteit – Arends said that the staff was increased from two to four people. The idea is that in the following months this will be increased to six, so that they can execute all the work that the bureau needs to complete. “This guarantees that a person in the public apparatus who sees something that is not going well and lacks integrity can receive protection when bringing this to light.”

Dump at Parkietenbos needs to close on the 31st of December

Regarding the dump at Parkietenbos, which needs to close on the 31st of December, Arends was asked if Carentra – recycling and scrap trading firm – currently has the equipment to process tires. Arends explained that initially Ecotech – Recycling and waste processing company – receives the tires, remove the iron from it and send that to (recycling company) Daltra, and afterwards the iron is exported. As for the tire itself, Ecotech shreds them and the smaller tires go to Carentra where they use pyrolysis to process these tires to get oil as well as black carbon, which will be exported.

“The oil will be used to reduce the amount of Heavy Fuel Oil that Aruba is importing to power the turbines at (utilities company) WEB Aruba NV. These are the advanced agreements that are taking place with FMSA and Carentra, and this way we are closing the circle to arrive at a circular economy”, Arends said. “This is a perfect example of one product, and in the same way we are working on other waste streams to close the loop and arrive at a circular economy.”

As can be seen on social media, there is a lot of unhappiness from drivers in the local community in the last few days since Aruparking was reactivated and they found stickers stuck on their cars, particularly on the driver’s window. They were unhappy with it because of the precise placement of the sticker.

He said he agrees that Aruparking needs to be introduced in a way that will not inconvenience or antagonize the citizens. “In this I am in complete agreement. We will work together with the supervisory board and the management of Arubus to introduce Aruparking in a way that is in good social form, and also in a way that it really creates the regulation, organization, accessibility and mobility that we want to see in the city centre.”

The Butterfly Farm flies into its 20th year in Aruba