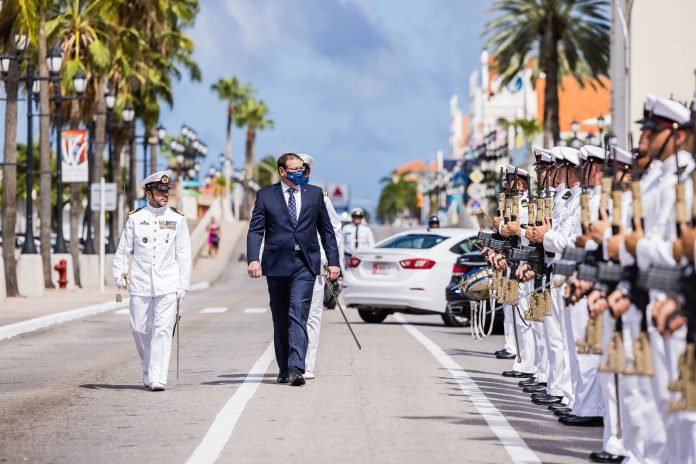 The Governor of Aruba, His Excellency Alfonso Boekhoudt, gave a speech at opening of the Parliamentary year 2021-2022 which took place on Tuesday, September 14, 2021. The ceremony also took place in Curacao and Sint Maarten at the same time.

In the annual speech, the Governor as head of government announces policy plans for the coming year. The main theme concerned the strengthening of democracy in Aruba.

The opening of the parliamentary year of the States of Aruba takes place annually on the second Tuesday of September. Just like in 2020, there was also a modified opening ceremony this year, taking into account the corona measures in force.

Military presence at the opening ceremony

With gun salutes and military ceremonials, Defense was present this morning at the Openings of the States in Aruba and Curaçao. The military presence is a tradition and marks the link between politics and the armed forces, at the start of the new political year.

The military presence at the Openings of the States was on both Aruba and Curaçao. Detachments of the Royal Netherlands Army (Compagnie in the West) and the Curaçao militia were present on Curaçao. On Aruba this was the Marine Squadron Carib. The ceremonial was completed in both countries by music from the drums and pipers of the Marine Corps. In addition, salute shots were fired from Fort Krommelijn in Curaçao.

On Sint Maarten, the military presence at the Opening of the States was canceled due to the COVID situation there.